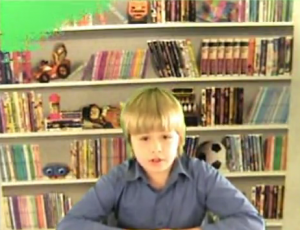 Man, there is nothing funnier than adorable racist children. Sure, children who haven’t been brainwashed by their parents and guardians to espouse horrible hatred that will forever keep them at a distance from society and unable to live a normal, happy life have their charms. But racist children? Those guys are hilarious. Especially when they have their own web series “for white kids” in which they discuss the clear racial undertones of Marmaduke. Seriously, that film was this generation’s Birth of a Nation.

Welcome to (the apparently legit) eighth episode of The Andrew Show, a series from WhitePrideTV.com in which a little boy describes in a (South African?) accent and explains how the dog park in Marmaduke is like how “different races come in and say white people shouldn’t have their land.” Huh. I missed that during my last viewing of the film. Of course I was distracted by all the hilarious shots of William H. Macy getting hit in the nuts. God, that’s a great film!

Anyway, this video clearly brings up a lot of distressing questions about race relations and the way we raise our children. Mostly though, I just want to know why they felt the need to use a green screen for the background. Could they not find an actual, real life book shelf to use?

Mucho props to Videogum for finding this. Not only because you should always give credit when due, but also because I don’t want anyone to think I spend time on a website called WhitePride.tv.

Check out the clip below. WARNING: You’ll never look at Marmaduke the same way again.