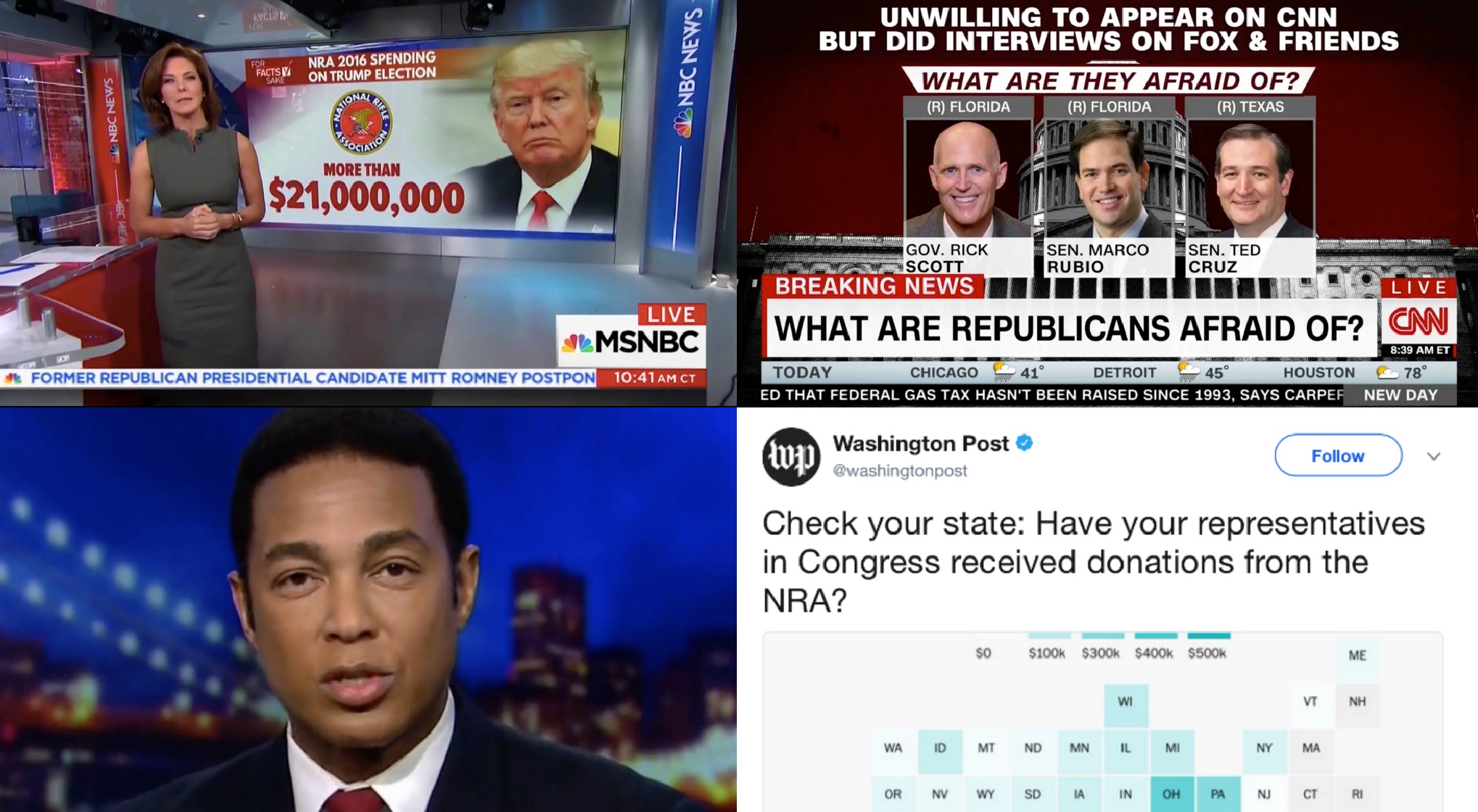 Our country is sadly becoming numb to these massacres. A monster guns down innocent people, the left blames guns, the right blames mental illness, Congress does nothing, and then we eventually move on until the next tragedy. Wash, rinse, repeat.

However, what’s becoming more and more concerning is how the media handles these devastating news stories.

There’s been an alarming trend of so-called “straight news” journalists not only taking a position in the gun debate — but becoming fierce gun control advocates themselves. CNN’s Chris Cuomo taunted Republicans, specifically Florida Governor Rick Scott and Senators Marco Rubio (FL) and Ted Cruz (TX) for appearing on Fox News instead of his show, asking “what are they afraid of?” when discussing gun control. Don Lemon literally told those who don’t think gun control is the solution to “shut up.” MSNBC’s Stephanie Ruhle called out the “thoughts of prayers” of several Republicans, including President Trump, by listing all their campaign contributions from the NRA, the left’s go-to boogeyman after these shootings. Anderson Cooper blasted “the sameness” that came from politicians who receive donations from the NRA. The Washington Post used a similar tactic.

Check your state: Have your representatives in Congress received donations from the NRA? https://t.co/ccHYwRBiPF

It’s quite remarkable when the NRA is branded as a “terrorist organization” after these mass shootings despite its 5 million members that are law-abiding citizens and responsible gun owners.

And we can’t ignore the false reporting that there have been “18 school shootings” so far this year, something that was pushed by pro-gun control group Everytown For Gun Safety Support Fund and that The Washington Post had to debunk as well as the gross mischaracterization that Trump “rolled-back” background checks for the mentally ill when in reality the ACLU was against the Obama-era policy from the beginning because it potentially infringed on the gun rights of 75,000 to 80,000 Americans who received disability payments from Social Security for various mental conditions. In other words, that policy was too broad in terms of what was considered “mentally ill” to own a gun while at the same time was only targeting those enrolled in Social Security, which the gunman in Florida was likely not.

Folks like Cuomo, Lemon, Cooper, and Ruhle have every right to believe what they want to believe. The problem is that even after they spent the past 24 hours blasting Republicans for their timid stance on gun control, they’d still tell you that they are unbiased journalists. And we’ve seen this over and over again after the Texas church shooting, the Las Vegas shooting, the Alexandria shooting as well as Orlando, San Bernardino, Charleston, and Newtown where non-opinion members of the media spout their opinions and label them as facts.

Commentators, pundits, news analysts, and opinion hosts are able to express their views because it’s part of their job. Megyn Kelly, for example, often gives spot-on monologues after these tragedies just like she did with this one, and as a host of a daytime talk show, she can do whatever she wants. You can trash Sean Hannity, Tucker Carlson, or Laura Ingraham for pushing back against the gun control narrative, but at least none of them are pretending to be unbiased news anchors like Cuomo, Ruhle, and Cooper routinely do.

That’s the real danger in this advocacy “journalism.” Many members of the media have been abusing their positions in print, on TV, and online because they’re not just reporting the facts — they’re advocating, they’re taking sides, and they’re often doing the job of Democrats themselves. And it’s not just in the aftermath of these massacres. Even the latest controversial remark or tweet from Trump is criticized by those whose jobs aren’t supposed to be critics. This only feeds into the distrust of the media.

According to a Knight-Gallup poll taken last month, only 27% of Americans are “very confident” they can differentiate when a news source is reporting factual news versus commentary or opinion. 66% of them say the media doesn’t do a good job of separating fact from opinion (a drastic increase from 42% in 1984). And nearly half of Americans believe it is the responsibility of the media to ensure them that they have an accurate and politically balanced understanding of the news (the other half say it’s their own responsibility).

When conservatives complain that there’s liberal bias in the media, that’s because there is liberal bias, and I believe more so now than ever. And for the first time, a Republican was able to successfully weaponize liberal bias by calling it and virtually any negative news story about him “fake news.” That man currently lives in the White House because like him, his supporters resent the media. It’s a shame that the distinction between a critical news story and a biased or inaccurate one is increasingly being lost but the blame for that lies not with President Trump but with the self-righteous liberal members of the media who created an environment of distrust.

It’s unfortunate that we’re all stuck facing the same emotional and political havoc after each of these shootings, which is only dividing this country even further. And the harsh reality is that we will be doing this all over again in a few weeks. That said, we in the media have a responsibility to A. report the news objectively and B. give honest, reasonable analysis.

There are “opinion” disclaimers at the top and bottom of this page, so you know that what you just read was an opinion. And based on the media’s recent coverage of mass shootings, we can sure use more of these.