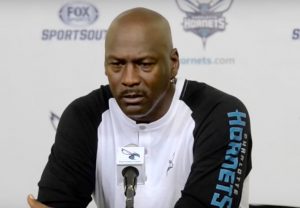 Following a violent night of protests in Charlotte in which rioters looted the Charlotte Hornets team store, NBA legend Michael Jordan — the team’s principal owner and chairman — called for “calm” in the city on Thursday.

“In light of the tragic events of the past three days, it is more important than ever that we restore calm and come together, as a community, in peaceful demonstration and conversation, and in constructive and non-violent ways,” Jordan said.

Jordan statement comes after two days of protests following the fatal shooting of African American Charlotte resident Keith Scott. Police claim Scott was armed, but Scott’s family said he was holding a book when he died.

First, I want to express my condolences to the Scott family for their loss. I also wish for a full recovery to those who have been injured.

In light of the tragic events of the past three days, it is more important than ever that we restore calm and come together, as a community, in peaceful demonstration and conversation, and in constructive and non-violent ways. As part of the fabric of Charlotte, the Hornets organization is committed to working with civic leaders, our elected leaders and law enforcement to foster more trust, transparency and understanding so we can heal and grow together as a community.

The Hornets’ owner has had a history of not speaking out on social issues, although he did recently make a statement following fatal incidents of violence committed by and against police officers in Baton Rouge, Minnesota, and Dallas.

Jordan said he was “deeply troubled by the deaths of African-Americans at the hands of law enforcement and angered by the cowardly and hateful targeting and killing of police officers.”

WCNC-TV in Charlotte first reported that the Hornets store was targeted by looters. The store is located at the Spectrum Center, where the team plays its home games.