Al Gore Responds To Bill O’Reilly: Yes, There Can Be Snow And Global Warming At The Same Time 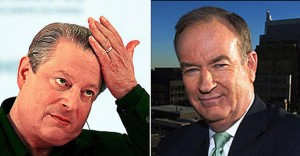 You can set your watch by it ever year. Whenever there’s snow on the ground, as sure there are children hoping for a snow day, there’s someone out there smugly shaking their head and saying, “Guess Al Gore was wrong about that whole Global Warming thing, huh?” This year that person was Bill O’Reilly and, this year, he actually got a response from none other than Gore himself.

It started with a moment on the January 27th episode of The O’Reilly Factor where the Fox News host asked why “southern New York turned into the tundra.” He then joked that he had “a call in to Al Gore.” Yuk yuk. Mega burn.

Gore responded to the remark in a typically dry and calm response. You can really imagine it being read in Gore’s voice. Don’t though. You’ll fall asleep and miss what he’s actually saying:

“I appreciate the question.

As it turns out, the scientific community has been addressing this particular question for some time now and they say that increased heavy snowfalls are completely consistent with what they have been predicting as a consequence of man-made global warming:

‘In fact, scientists have been warning for at least two decades that global warming could make snowstorms more severe. Snow has two simple ingredients: cold and moisture. Warmer air collects moisture like a sponge until it hits a patch of cold air. When temperatures dip below freezing, a lot of moisture creates a lot of snow.’

‘A rise in global temperature can create all sorts of havoc, ranging from hotter dry spells to colder winters, along with increasingly violent storms, flooding, forest fires and loss of endangered species.’”

Now, if you’ll excuse me, I have to walk through all the snow (that’s right, hippies. SNOW!) down the street to get a pack of cigarettes. Sure, scientists claim they’ll give me cancer but I don’t have cancer yet, therefore I never will ever.

(h/t The Hill via Gawker)