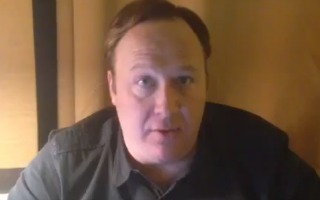 Moments after radio host Alex Jones taped an explosive interview with CNN host Piers Morgan, Jones took to YouTube where he expressed his fear that he would be harmed by the New York Police Department or members of the mafia hired by NYC Mayor Mike Bloomberg.

Jones said that he was accosted by a member of the NYPD moments before he entered CNN headquarters in New York City. He said one plain cloths police officer in particular confronted him in a threatening manner. “They’re like cops from the movie Good Fellas,” Jones said.

His associate who was operating the camera said that he believed Jones was being “cased” by members of the NYPD and Bloomberg.

Jones went on to say that CNN’s producers “panicked” during his interview and cancelled a planned third segment with Morgan. It was after the interview, Jones says, that he became afraid for his life.

“If you don’t know that Bloomberg is total mafia, you’re on another planet,” Jones said. “They’re thugs. I know what they are.”

“If something happens to us, or we’re killed by crackheads, it was the NYPD or mafia they hired,” Jones added.

“This city runs white slaves, that’s sex slaves, out of here all day,” said Jones. “This is mafia central.”

“I think putting this video out will protect us,” Jones concluded. “It was just super creepy.”