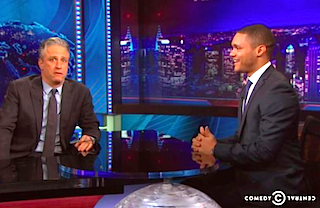 Just when you thought the “kerfuffle” over new Daily Show host Trevor Noah’s Twitter history was finally dying down, the American Jewish Congress has released a petition that labels the South African comedian a “sexist anti-Semite” and calls on Jon Stewart to rescind his contract.

Following the announcement that Noah would be replacing Stewart later this year, journalists combed through years of his tweets and came up with a handful of jokes that took shots at Israel and overweight women, among other apparently off-limits targets.

“How can one of the world’s most admired Jewish comedians leave his legacy to a sexist anti-Semite?” AJC president Jack Rosen wrote in an email to supporters this week. “Do sexist, anti-Semitic jokes really represent the comedy institution that Jon Stewart has spent the last decade building? Is this crude humor something that fans of the Daily Show will be receptive to? We don’t think so. That’s why we’re calling on Jon Stewart: Rescind Trevor Noah’s Daily Show contract.”

The message linked to a petition page on the group’s website that asks people to “Take a stand against sexism and anti-Semitism” by signing their name to this cause: 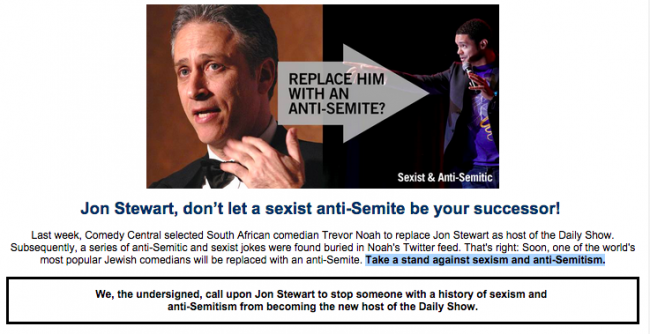 Last week, Comedy Central issued a statement of support for Noah that said “to judge him or his comedy based on a handful of jokes is unfair.” Then, last night, Stewart addressed the issue directly for the first time.