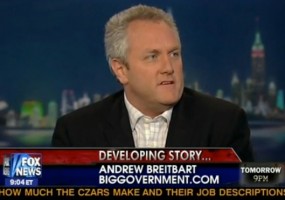 When Andrew Breitbart launched Big Government in September, we asked if he was gearing up to be the next Arianna Huffington: An opinion blog rainmaker with a one-stop digital powerhouse, but presented from the opposite end of the political spectrum.

Three months later, hyperbole has become reality as Breitbart is adding to his network of vertical blogs. The newest site to join the Breitbart network is “Big Journalism,” which will launch in January of next year. His target is much bigger than HuffPo — or any other website for that matter. Breitbart is gunning for the institution of mainstream media, or what he calls “the Democratic-media complex.”

In an exclusive interview with Mediaite, Breitbart shares his vision for his expanding network of “Big” right-of-center sites:

Though he’s not exactly a household name, Breitbart has long been a power player in the sphere of Internet influence and opinion. While he may be best known for serving as an editor for The Drudge Report, he also served as an early researcher and developer for The Huffington Post. Since setting out on his own, he’s created a number of sites: Breitbart.com is the core site, aggregating countless headlines from dozens of sites and newswires in real time; BreitbartTV performs a similar function with videos; and Big Hollywood and Big Government are conservative group blogs which cover entertainment and government policy, respectively.

Breitbart: “If these traditional media outlets can’t be shamed into telling the truth, diverted for doing the wrong story, for simply running defense for one party, and mocked away from creating journalistic rules that only hold those on the right accountable, then it puts us in a position to do more than we’ve done in the past with talk radio and web aggregation.”

In a phone interview with Mediaite, Breitbart says that his new sites will continue to “fight the mainstream media — New York Times, Washington Post, LA Times, CBS, ABC, NBC, MSNBC, and CNN — who have repeatedly, and under the guise of objectivity and political neutrality, promoted a blatantly left-of-center, pro-Democratic party agenda.” Each site will focus on a different topic, but will follow the same groupblog-like model, which is currently employed by Big Hollywood and Big Government. Each will have a central editor who coordinates contributions, many from current and former journalists around the world.

Big Journalism will be run by former Time Magazine staffer Michael Walsh, who is also a former journalism professor and film & television professor at Boston University. Walsh and Breitbart met at a casual gathering of like-minded people and hit it off. When Breitbart made the decision to launch a new site covering journalism, he says that Walsh was first person that came to his mind. The fact that Walsh is a media veteran going back to the early 70s didn’t hurt, he said.

Walsh and Breitbart share a similar distaste for the day-to-day work of “institutional journalists.” In an interview, the new editor of Big Journalism boiled down the mission of the site thusly: “Our goal at Big Journalism is to hold the mainstream media’s feet to the fire.  There are a lot of stories that they simply don’t cover, either because it doesn’t fit their world view, or because they’re literally innocent of any knowledge that the story even exists, or because they are a dying organization, short-staffed, and thus can’t cover stuff like they did before.”

“Big Journalism will be the go-to site for solidly backed-up stories, sharp points of view, and really great writing,” he said. “We are defenders of the First Amendment and resolute enemies of political correctness. That’s the key to the site’s philosophy.”

Breitbart feels that “if these traditional media outlets can’t be shamed into telling the truth, diverted for doing the wrong story, for simply running defense for one party, and mocked away from creating journalistic rules that only hold those on the right accountable, then it puts us in a position to do more than we’ve done in the past with talk radio and web aggregation. The market is wide open to go on the offensive, to tell truths that aren’t being told. The center-right alternative media has been playing a passable prevent defense, constantly saying ‘that’s not right’ for consistently biased reporting. Now we aim to offer more aggressive journalism and to give the mainstream media a little dose of its own medicine.”

So while Big Journalism is the next “big” thing, it’s only one part of what Breitbart hopes will become a much larger empire. He plans, in the not-too-distant future, to unveil new sites as part of his “Big” network, including Big Education, Big Tolerance, Big Jerusalem, and Big Peace, among others. Each site will be a mix of aggregation and group blogging. There will be overlap among the sites’ contributors: For example, if an Israeli politician wants to offer his perspective on a Hollywood film, he will be able to post something on a number of relevant sites.