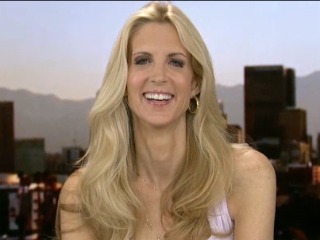 Conservative commentator Ann Coulter appeared on radio host Hugh Hewitt’s radio program on Thursday where she was asked to respond to President Obama’s assertion that he was not born ‘with a silver spoon in his mouth’ – a comment that some believe was directed at Republican presidential candidate Mitt Romney. Coulter said that Obama did indeed have more than his share of advantages, and in the modern era any advantage that society yields is the equivalent of an “affirmative action silver spoon.”

RELATED: Ann Coulter On O’Reilly: Every Black American Should Get A Gun, Join The NRA

Hewitt introduced Coulter by playing a clip of Obama campaigning in Ohio, where he said “I wasn’t born with a silver spoon in my mouth.”

“Really, this ‘silver spoon’ business?” Coulter said. “Are they going to do that about every Republican while simultaneously revering FDR and JFK? They really were pure silver spoon aristocrats inheriting all their money. Mitt Romney gave away all the money he inherited. He made it on his own.”

“And the silver spoon Obama got — I mean that generation, it can’t be denied, you can’t support affirmative action and then pretend it doesn’t exist. You don’t transfer from Occidental, which by his own accounts in his autobiography he mostly spent smoking pot, to a fine Ivy League university like Columbia if you’re not checking off ‘black’ on your application. So you know, the silver spoon since I’ve been alive has been an affirmative action silver spoon.”

Hewitt asked Coulter if that narrative holds up against Romney, who was born to a father who did not graduate college before he joined the auto industry and eventually became the governor of Michigan.

“I just don’t think Americans are angry at people who go out, work hard and show talent and make the world a better place,” she continued. “Do we hate Steve Jobs or Bill Gates?…I think the real class warfare that Americans are hopping mad about is the class warfare between those of us who pay taxes and the people’s whose salary they pay — for their fabulous pensions and they’re partying trips to Las Vegas.”

“That kind of class warfare I think really strikes a chord right now,” Coulter concluded. “Not somebody who has worked hard and done well for himself.”

Listen to the segment below via the Hugh Hewitt radio show: