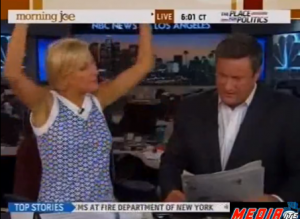 Mika Brzezinski on Morning Joe unleashed some criticism this morning when, speaking about the reaction in L.A. to the monumental court decision to overturn the referendum in California that prohibits same-sex marriage, she said, “People were prancing around in the streets.” Cue, censure. Many were atwitter, saying that Brzezinski’s words are the kind of provincial thinking about gays and lesbians that led to the relegation of gay marriage to begin with. Here’s the bottom line: if Judge Walker had upheld Proposition 8 yesterday, the anti-gay marriage folks would have been “prancing in the streets” too.

First the baby blog 2 Political Junkies posted about the incident, saying “I find it hard to understand how anything previously said on the show could justify her use of the word “prancing” in conjunction with gays celebrating a ruling regarding their due process and equal protection rights.” Then, Gawker TV agreed, saying she “inserted her foot in her mouth.”

I am all for swiftly denouncing bigoted claims. But this is a non-issue veiled in controversy. Here’s why.

1) “Prancing in the streets” is not offensive. It might be if gay people were the only people to prance in streets, but pretty much any celebration rally includes prancing. Besides the fact that the phrase is common and widely used, there was no indication that Brzezinski meant it in the way it was received.

2) Mika’s face pretty much says it all. Her original comment was much too candid for it to have been premeditated. She gets so flustered that she looks wearily into the camera (00:43) before accidentally blocking Joe Scarborough’s line of sight with a guest. If she intended to be controversial, she probably would have wiped that look of forlorn off her face.

3) Joe Scarborough’s reaction is the real problem. He immediately makes the connection between prancing and gay people. Specifically, he accuses Brzezinski, although without explicitly saying it, of saying gay men are flamboyant. This is the kind of backwards discrimination we see at every turn, isn’t it? Someone says something completely harmless and it is turned into an insult, thereby exacerbating both the sensitivity and stereotype itself.

This is a cut and dry false controversy. When the National Organization for Marriage’s Maggie Gallagher is doing her own kind of “prance” around the primetime cable news shows describing why gay marriage perverts the minds of our children and violates common sense, why would anyone want to fan the flames of something so utterly innocuous?