Another One Bites The Just: Democratic Senator Tom Carper Comes Out In Favor Of Gay Marriage 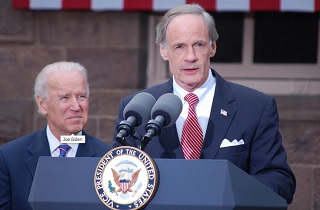 The attention surrounding the Supreme Court’s hearings on a pair of marriage equality cases has resulted in an explosion of Democratic lawmakers (and one Republican) coming to Jesus on gay marriage, a trend which continued Tuesday morning when Senator Tom Carper (D-DE) announced his support for legal same-sex marriage. In a posting on his Facebook page, Senator Carper cited God, prayer, and “the Golden Rule” as factors in his decision. Carper’s conversion leaves just seven Senate Democrats and forty-four Senate Republicans who have not endorsed marriage equality.

As our society has changed and evolved, so too has the public’s opinion on gay marriage – and so has mine. I pray every day for God to grant me the wisdom to do what is right. Through my prayers and conversations with my family and countless friends and Delawareans, I’ve been reminded of the power of one of my core values: the Golden Rule. It calls on us to treat others as we want to be treated. That means, to me, that all Americans ultimately should be free to marry the people they love and intend to share their lives with, regardless of their sexual orientation, and that’s why today, after a great deal of soul searching, I’m endorsing marriage equality.

When reading one of these explanations, which invariably involve God and prayer and doing what’s right, there’s rarely, if ever, a recognition that prior to the conversion, somebody was wrong. Did God forget to charge his iPhone for forty years? Did recognizing the full humanity of others suddenly become right?

Having said that, even before today’s announcement, Sen. Carper wasn’t really part of the problem; his record on LGBT rights was pretty good. From On The Issues:

With a record like that, though, it’s tough to understand why Carper would need this much time to come out in favor of marriage equality, just as it was to understand President Obama’s glacial evolution. You’re paying whatever political price there is for voting in favor of equality, while passing on the political benefit by not endorsing it.