‘Anti-Fascists’ Act Like Fascists In Threatening GOP Marchers in Portland 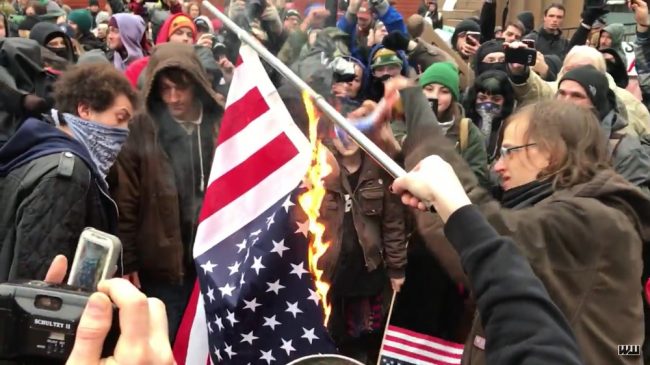 Left-wing activists in Portland, Oregon forced the cancellation of an annual parade because they had the gall to invite local Republicans to participate in the event.

On Tuesday, the organizers of the 82nd Avenue of Rose Parade, which was scheduled for April 29, 2017, cited “the type of riots which happen in downtown Portland” as the reason they cancelled the event, according to a Tuesday article from The Oregonian.

The newspaper reported that the organizers received a “threatening e-mail” that revealed what would happen if they let the Multnomah County Republican Party march in the parade.

“You have seen how much power we have downtown and that the police cannot stop us from shutting down roads so please consider your decision wisely,” the anonymous email said, telling organizers they could cancel the Republican group’s registration or else face action from protesters. “This is non-negotiable.”

The e-mail also pointed out that two protests were planned for the parade. Both events decried the presence of “fascists” in the event.

KGW-TV, NBC’s affiliate in Portland, posted the full text of the anonymous e-mail on Wednesday — which, in part, threatened that “we will have two hundred or more people rush into the parade into the middle and drag and push those people out as we will not give one inch to groups who espouse hatred toward lgbt, immigrants, people of color or others.”

According to The Oregonian, the parade’s organizers made their move “after contacting Portland police…When police said they couldn’t offer any additional security for the parade, organizers decided to cancel it due to safety concerns.”

The Atlantic spotlighted the controversy on Wednesday. The publication zeroed in on the Facebook event description for one of the two protests.

The fascists know that we’ll keep shutting their marches down, they are now planning to march within other parades to protect their message of hate and white supremacy – it WON’T work. Nazis will not march through Portland.

The Atlantic later quoted from the Multnomah County Republican Party’s statement on the parade’s cancellation: “The road to fascism begins with armed gangs of thugs using violence to shut down opposing points of view. The question now is whether the City of Portland will be complicit in such conduct.”