AP Says It Will Not Distribute Photos Of Burning Korans 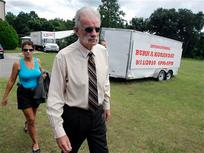 It’s official. Pastor Jones and his 30 followers have hijacked the newscycle. After nine years of managing to calmly and respectfully mark the anniversary of 9/11 the nation appears to have suddenly gone into nutty overdrive. So much so the State Department has issued a “‘Worldwide Caution’ to warn Americans of dangers abroad linked to plan for Koran burning and 9/11 anniversary.” So now the Koran burners, all 30 of them, are not just endangering our troops they are apparently endangering all Americans everywhere…with a lot of help from the media.

Except people everywhere will have a hard time getting their hands on images of Koran burning if the AP has anything to do with it. Yahoo’s Michael Calderone reports (via Romenesko) that the AP has announced it will “not distribute images or audio that specifically show Qurans being burned, and will not provide detailed text descriptions of the burning.”

Tom Kent, the AP’s deputy managing editor for standards and production, told staff Thursday that while the AP will cover the Gainesville, Florida event organized by pastor Terry Jones, it’s important to “plac[e] the actions of this group of about 50 people in a clear and balanced context.”

It’s a slippery slope. On the one hand, this is a story that desperately needs some context and balance, (or needed…that horse has sort of left the barn so to speak) and the decision not to add fuel to the fire with upsetting images is in many ways admirable. On the other hand, balance and context where this story is concerned went out the window a while ago — in the interim Gen. Petraeus, Hillary Clinton, President Obama and the State Department have all weighed in, meaning for better or worse this story has attained international importance. And good intentions aside it is always worrisome when a large news organization censors its own news reporting. Even when they are censoring things you wish had never been made newsworthy to begin with! As Calderone points out the “AP not distributing Quran images is big deal because of how many US papers rely on them — dozens used AP shots of Jones on Wed front pages.”

This is not the first time the AP has made headlines for its coverage Islam-related coverage, last month they announced they would not refer to the proposed Lower Manhattan community center as the Ground Zero Mosque.