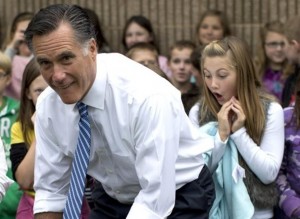 On Monday, the Associated Press opened up an Internet-wide caption contest when it published a photo of Mitt Romney crouching as he went to pose for a photo in front of children from a Virginia school where he made a pit stop. We chuckled, we joked…but some of us weren’t very happy. Criticism from the some, including FoxNews.com, spurred the AP to issue a clarification.

“The candidate riding a wave of confidence from last week’s debate performance was suddenly made, pardon, the butt of jokes,” FoxNews.com said. “So was it a cheap shot?”

“It’s unbelievable,” Newsbuster’s Tim Graham said in the same post. “It honestly looks like a little girl is gaping at Romney from behind.”

And thus the AP sought to clarify, via caption. The original one read:

“Republican presidential candidate, former Massachusetts Gov. Mitt Romney poses for photographs with students of Fairfield Elementary School, Monday, Oct. 8, 2012, in Fairfield, Va. A student, right, reacts as she realizes Romney will crouch down directly in front of her and her classmates for the group photo.”

The AP also released a statement saying the new caption better explained what was happening at the time of the photo — and clarifies the student’s reaction is because Romney was posing for a photo right in front of her and her friends.

Fair enough. But really, AP, that photo’s just asking for it.