Are Children Just Supposed To Shut Up And Die?

Are Children Just Supposed To Shut Up And Die? 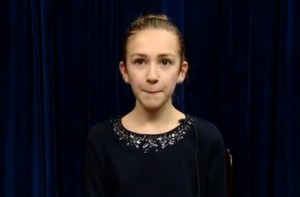 During the same week in which the National Rifle Association launched an attack ad directed at the protection of President Obama‘s daughters, and a false one, at that, courageous voices have emerged to denounce the “stomach-churning” use of children for political purposes. Unfortunately, these conservative voices aren’t referring to the NRA’s outrageous attack, but to the children who wrote to President Obama asking him to do something about gun violence. If the NRA deserves a voice, then surely, the children whose lives are at stake deserve one, too.

To be clear, I don’t think it’s always appropriate to involve children in politics, nor do I think it’s always inappropriate to reference a politician’s kids in a political ad; as with most things, it depends on how you do it. Those videos in which parents shove their children at a Michele Bachmann type, and gruffly coach them on how to shame her, are the wrong way, as is releasing a false ad that calls the security of the First Daughters into question. Both instances say more about the adult messengers than they do about the children involved.

It’s also not entirely dependent on the kids’ desire to speak, or the parents’ consent for them to do so. News outlets should have shown restraint, and not rushed to interview kids when their parents’ judgment was compromised in the hours after the shooting.

Children also aren’t necessarily relevant to every political issue, at least not directly. Liberals and conservatives, at various times, have invoked the “children and grandchildren” who will have to pay for whatever it is they don’t want to pay for, but you’re not likely to hear those actual children weigh in on fiscal policy.

However, children are uniquely relevant to the shootings at Sandy Hook Elementary School, yet it seems as though we’re ready to give a voice to anyone and everyone except the group of people who were the targets of that attack. The kids who sat onstage as President Obama unveiled his plans were not coerced, or compromised by fresh trauma, they wrote thoughtful letters to the President, they were invited to attend, and that’s what they did. Instead of wanting to silence these kids, we should be wanting to hear more from them. Those fainting and fanning themselves over this are so busy being outraged that these kids spoke out that they don’t seem to have listened to what they had to say.

Some of it was insightful, and contrary to what you might think, not all that politically helpful to the President. Third-grader Hinna asked the President, “Can we stop using guns?”

Julia, the 11 year-old whom the President addressed on stage, suggested that guns “only be used in the most horrible event, where others will get hurt if they are not.”

The measures that the President proposed don’t go anywhere near what these kids are asking for, and arguably demonstrate just how far his proposals are from where they could have gone.

Eight year-old Grant said “It’s a free country but I recommend there needs (to) be a limit with guns. Please don’t let people own machine guns or other powerful guns like that.”

Grant’s letter reads like a perfect pitch for the assault weapons ban, because he references machine guns, which have already been regulated to the point where they are no longer a significant problem, and suggests treating other weapons the same way. If the President ends up passing some watered-down version of the assault weapons ban, he’s going to have to look Grant in the eye.

That’s really what all of this is about, though. It’s not concern over propriety, or for the well-being of those kids, it’s about making policy arguments without having to look these kids in the eye. To some extent, we adults all deserve the country we get, we voted for these people, we stood by silently for years, or just didn’t care enough about it.

But when we make a mistake about gun policy, it is children who are punished for it, in many different ways. Whether or not we want to do what they tell us to do, we owe it to at least listen to what they think of how we’ve handled it.

I don’t want to hear less from these kids, I want to hear more. Were there any kids who wrote in to the President asking for their teachers to have guns? Were there kids who wrote in asking that they be allowed to carry guns? One thing that’s clear is that these shootings have frightened kids as much, if not more than, they’ve frightened us, but unlike the adults, these kids can’t do anything about it. Except write letters to the President.

The main argument against this is that it’s an appeal to “emotionality,” unlike, say, every other thing about politics, ever. In this case, though, the thoughts and feelings of these kids should be an appeal to conscience. Whether we enact all of the President’s proposals, or none of them, these kids are going to have to live in the world we create for them, and all of us, President Obama included, will have to look them in the eye and tell them we did the right thing, and we did our best. Looking away from them? Now, that’s stomach-churning.