Are Too Many Women To Blame For Sandy Hook Death Toll? One National Review Contributor Thinks So

Are Too Many Women To Blame For Sandy Hook Death Toll? One National Review Contributor Thinks So 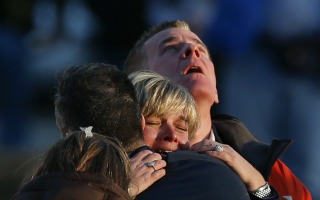 Charlotte Allen, an author and a contributor to the National Review Online, took a Ted Williams-sized swing at the hornet’s nest of public opinion on Wednesday. With many still in shock and nerves still raw following the massacre of children and teachers in Connecticut on Friday, Allen posited that the “passivity” which reigns in a “feminized setting” like an elementary school made the killer’s work easier. She wondered whether the addition of a few bulky males to the teaching staff would have increased the odds that the killer could have been incapacitated earlier and a few more lives saved. Allen’s post is being met with … healthy skepticism.

“The principal, Dawn Hochsprung, seemed to have performed bravely. According to reports, she activated the school’s public-address system and also lunged at [Adam] Lanza, before he shot her to death. Some of the teachers managed to save all or some of their charges by rushing them into closets or bathrooms.” Allen writes.

However, Allen proceeds to contradict this finding in the following sentence. “[I]n general, a feminized setting is a setting in which helpless passivity is the norm,” she writes, without acknowledging that the heroic staff at Sandy Hook Elementary were, by her own logic, exceptional.

Male aggression can be a good thing, as in protecting the weak — but it has been forced out of the culture of elementary schools and the education schools that train their personnel. Think of what Sandy Hook might have been like if a couple of male teachers who had played high-school football, or even some of the huskier 12-year-old boys, had converged on Lanza.

“In addition to how forehead-smackingly stupid it is to suggest that 12 year old boys rush a grown man armed with an assault rifle – WOW is this disrespectful to the female teachers and staff at Sandy Hook,” writes a sharply critical Jessica Valenti, writer for The Nation.

She notes that Allen’s assessment insults the memories of Hochsprung, as well as Mary Sherlach, school psychologist, and teacher Victoria Soto. Both died protecting their students.

Valenti smartly refrains from calling Allen’s post sexist. Allen displays an offensive dismissiveness of the noble actions of Sandy Hook’s faculty who, by all accounts, did everything they could in the heat of the moment to disable a mad gunman. That loaded term may accurately describe Allen’s take on the situation. However, Valenti brilliantly avoids this casual shorthand which makes readers, already reflexively hostile to the overwrought and predictable invocation of any number of “isms,” defensive. This restraint makes Valenti’s criticism of Allen ring all the more true.

There is no need to insert gender politics into a tragedy that has become too political to be healthy. There is still grieving to be done. Allen’s thought experiment is entirely inappropriate today. Later, once the grieving process is complete, Allen’s suggestion will become less offensive, and we can go back to regarding it as garden-variety foolishness.