Arthur Sulzberger Jr.: “We Will Stop Printing The New York Times Sometime In The Future” 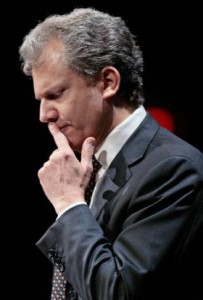 On Wednesday, New York Times chairman and publisher Arthur Sulzberger Jr. dealt Luddites a blow by admitting that eventually, the Gray Lady will exist only virtually.

Sulzberger made these remarks at the WAN-IFRA’s 9th International Newsroom Summit, a conference being held yesterday and today in London. The publisher was there to deliver the keynote speech during a session about getting readers to pay for online content—the New York Times is slated to introduce a metered paywall on its website early next year.

Though Sulzberger’s statement may seem shocking, it shouldn’t surprise anyone who’s been following the plight of print media over the past decade. Mashable reports that the situation is rapidly growing more and more dire:

As newspaper circulation continues to fall, so do newspaper revenues. All told, losses amount to 27.2% or ad revenue lost year-over-year between 2008 and 2009. More and more consumers are using the web to stay updated about current events; in fact, in a poll earlier this year, only 21.7% of Mashable readers said they got their news from a newspaper.

Clearly, something has to change if venerable news institutions like the Times are to stay afloat. Sulzberger seemed confident about the paper’s imminent paywall, calling its adoption “a step in the right direction for us.” And if this experiment turns out to be a bust, like the TimesSelect debacle of 2007?

Well, that’s the beauty of working in a relatively low-cost digital atmosphere: “If we discover that we’ve tried something that’s not working, we could change it,” Sulzberger said.