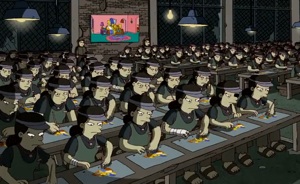 Banksy is a British street-artist and political activist known for both for his satirical and subversive style. Last night’s episode of The Simpsons featured an opening title sequence that was guest-directed and storyboarded by the street artist in what was a jaw-dropping critique of global corporate licensing, worker exploitation and over-the-top dreariness of how western media companies (in this case, 20th Century Fox) takes advantage of outsourced labor in developing countries. A pretty searing indictment of Fox Broadcasting (except of course, it was broadcast on Fox.)

Robert Quigley puts the opener in perspective at Geekosystem:

Street artist and activist Bansky storyboarded and directed the opening to last night’s Simpsons, and … wow. Fox actually let this run. The opening bit is decent enough, but wait until you get to the couch gag (at about the 0:35 mark), which consists of a brutal, unrelenting tour of the Banksy-imagined Asian sweatshop where frames of Simpsons animation are inked and merchandise is made, a horrifying gray cave filled with vats of toxic waste and human bones. Though a panda and a unicorn each make an appearance, there are no laughs to be had in this bleak tour.

TV Squad’s Catherine Lawson reports that this is the first time an artist has been invited to storyboard part of the show, and that “Bansky said his ideas led to delays, disputes over broadcast standards and a threatened walk out by the animation department.”

“This is what you get when you outsource,” joked executive producer Al Jean.