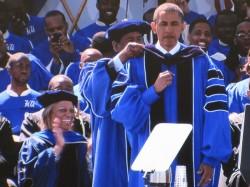 Kids today! President Obama delivered the commencement address at Hampton University in Virginia earlier today and in a weirdly out-of-touch moment for a President who fought to keep his Blackberry, told the crowd of graduates that “with iPods and iPads and Xboxes and PlayStations…information becomes a distraction, a diversion, a form of entertainment, rather than a tool of empowerment.”

You’re coming of age in a 24/7 media environment that bombards us with all kinds of content and exposes us to all kinds of arguments, some of which don’t always rank all that high on the truth meter,” Obama said at Hampton University, Virginia.

“With iPods and iPads and Xboxes and PlayStations, — none of which I know how to work — information becomes a distraction, a diversion, a form of entertainment, rather than a tool of empowerment, rather than the means of emancipation,” Obama said.

He bemoaned the fact that “some of the craziest claims can quickly claim traction,” in the clamor of certain blogs and talk radio outlets.

Really? This is the first time I have heard Obama sound like an “olds” i.e. old and out of touch. It is one thing to bemoan or admonish Fox News viewers, or the like, who tend to skew older and to whom the information age arrived long after, say, college graduation, but it’s entirely another to lecture a bunch of 22-year-olds — who have only known the information age — about ‘crazy claims’ on the Internet. As far as I can tell, it’s the 22-year-old kids who are mostly like to weed out the nonsense from the truth, mainly because they have always had to.

To be clear, this wasn’t the main thrust of Obama’s speech; Hampton University is a historically black college (the first Obama has addressed) and the president spoke at some length about the “huge disparity in educational achievement between African Americans and other racial groups in the United States and the world.” Full video of the address below.