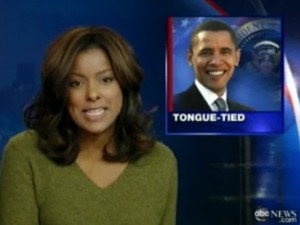 At Sunday’s Kennedy Center Honors, President Obama committed a verbal flub that presents a unique opportunity to analyze the Sarah Palin effect. Palin herself wondered why her misstatement got so much more play than some of Obama’s, but they weren’t really apples-to-apples comparisons.

“I’m Ron Burgundy?” moment combined with an unsuccessful attack of the word “superfluous,” is substantively equivalent to Palin’s recent “North Korean allies” remark, and given that neither got much of a mainstream media push, should make an interesting case study in internet gaffe democracy.

Palin’s North Korea remark was a relatively innocuous slip of the tongue, buoyed only slightly by poorly-sourced allegations from the book Game Change. In the same clip in which she misspoke, she also correctly identified South Korea as a US ally several times. While the gaffe was widely reported on the internet, the attention it generated was largely organic.

It stands to reason, then, that this flub by President Obama would do at least as well. He begins with a teleprompter misread, saying “Too many people” instead of “To many people,” then cleverly deflects attention to a mangling of the word “superfluous,” and blames it on his busted lip:

Neither gaffe has a shred of substantive value, but both have a roughly equivalent level of intrinsic humor, and seem equally designed to appeal to detractors. Therefore, it will be interesting to see how the Obama gaffe catches on online. There are certainly enough conservative eyeballs on the inteernet to make this a Palin-sized smash hit.