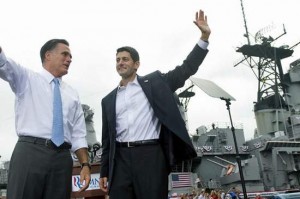 Former Massachusetts Governor and Republican presidential nominee Mitt Romney has adopted a curious strategy with his latest series of radio ads, which attempt to counter President Obama‘s most devastating line at Monday night’s foreign policy debate by attacking defense cuts that his running mate was instrumental in creating. The ads feature President Obama’s “horses and bayonets” summation of Gov. Romney’s failure to understand the needs of a modern military, and targets the effects of the defense cuts that will occur if Congress fails to meet the requirements of the Budget Control Act, which Romney running mate Paul Ryan led the charge for.

The weirdest thing about Gov. Romney’s new ads (the ads are essentially the same, but with state-specific narration) is that they highlight, and replay, the President’s most devastating exchange with Gov. Romney. “Our Navy now is smaller than any time since 1917. The Navy said they needed 313 ships to carry out their mission; we’re now down to 285. …That’s unacceptable to me,” Romney says in the spot, followed by a narrator who explains “To Mitt Romney, that’s a problem. To President Obama, it’s a chance to deliver a punch line.”

Yes, a punchline which explains why Romney’s metric is idiotic.

“The state of our Navy, the state of our entire U.S. military, is crucial for America. Our freedom depends on it. And so do many of our jobs, (state-specific number x) in (Florida/New Hampshire/Virginia) alone. Does President Obama know how much his defense cuts will hurt us?” the narrator says, before leaning into the really über-whiny portion of the narration.

“Sure, his flippant remarks insult Mitt Romney, but do they also expose how President Obama views the world and America’s place in it?”

Awww! The Pwesident gave the Govewnew an owie on his feewings!

You can listen to Romney’s radio ad here.

Reminding the world of that humiliation might be worth it if the payoff was there, but President Obama is just way too famous for preferring his hellfire to rain out of the sky, not from the sea, so it’s an easy thing for voters to choose which candidate is out of touch with modern warfare. Worse than that, though, is the fact that Romney’s accusation against “President Obama’s defense cuts” lead right to his own vice-presidential nominee, Paul Ryan, who not only voted for the defense cuts in the Budget Control Act’s sequester, he was largely responsible for the Act’s creation in the first place. It was Ryan’s Republican-led House of Representatives that held the full faith and credit of the U.S. government hostage in order to force a negotiation on deficit reduction, a move that cost the United States her triple-A credit rating.

Surely, Rep. Ryan was only a bitterly reluctant participant in the Budget Control Act, which triggers across-the-board spending cuts of $1.2 trillion (half in defense, half non-defense) if Congress fails to reach an agreement on deficit reduction by the end of this year. Actually, despite his recent attempts to disown it, Paul Ryan couldn’t have been prouder of that cute little bean when he first sired it:

Unlike the villains in a Scooby Doo cartoon, though, Mitt Romney has little to worry about from those meddling kids in the mainstream media, who have, thus far, done little to punish him for his dishonesty. It will be up to educated news consumers in the middle of the electorate to make Romney pay for pawning off Ryan’s defense cuts onto President Obama.

Ah, glad we could all enjoy a bit of a laugh together. If there’s any saving grace to the emptiness of an undecided voter’s head, it’s that they’ll probably tune out of these ads while laughing at the President’s zinger (after they Google the word “bayonet), and never even get to the part about defense cuts.