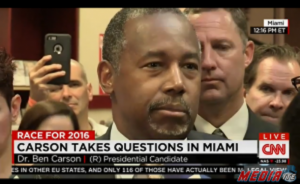 Republican presidential candidate Ben Carson defended his theory about the Egyptian pyramids Thursday, telling reporters that the criticism launched against him is the result of “secular progressives” trying to ridicule his faith.

Buzzfeed released footage yesterday of Carson reciting a 1998 commencement speech at Andrews University, the flagship educational institution of the Seventh-day Adventist Church. In his address, Carson revealed his personal theory about the Egyptian pyramids, suggesting they were built “in order to store grain.”

“Now all the archeologists think that they were made for the pharaohs’ graves,” Carson said. “But, you know, it would have to be something awfully big if you stop and think about it. And I don’t think it’d just disappear over the course of time to store that much grain.”

Carson told the graduates that “when you look at the way that the pyramids are made, with many chambers that are hermetically sealed, they’d have to be that way for various reasons.”

He added that some scientists think aliens played a hand in the pyramids’ creation. “You know, it doesn’t require an alien being when God is with you,” Carson said to applause from the audience.

Watch the video above, via CNN