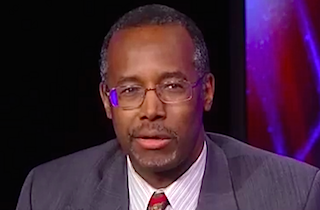 Dr. Ben Carson stopped by New York’s R&B radio station WBLS on Easter Sunday morning to share the news that he will announce his 2016 plans at the beginning of May. But while was there, the potential Republican candidate also made some comments about hip hop music that are likely to rub people, both in and out of the African-American community, the wrong way.

“We need to reestablish faith in our communities and the values and principles that got us through slavery, that got us through Jim Crow, and segregation, and all kinds of horrible things that were heaped upon us,” Carson said, according to Business Insider. “Why were we able to get through those? Because of our faith, because of our family, because of our values, and as we allow the hip hop community to destroy those things for us, and as we grasp onto what’s politically correct and not what is correct, we continue to deteriorate.”

The assertion that hip hop music stands in sharp opposition to “family values” received some pushback from the show’s host, who told Carson, “When you said ‘hip-hop,’ my antennae went up very quickly, because I said, ‘Wait a minute that sounds like an old argument that they used to make about rock ‘n’ roll/R&B back in the fifties.’ That’s what they used to say.”

In an attempt to better explain what he meant, Carson replied, “When I talk about the hip hop community, I’m talking about the aspect of modern society that pretty much dismisses anything that has to do with Jesus Christ, that’s what I’m talking about.”

But for anyone who has listened to hip hop over the past several decades, that dichotomy will likely ring false. God and Jesus Christ play a starring role in a large number of hip hop tracks — and frequently receive thanks before anyone else during the rap categories at the Grammy Awards. One need only look at Common’s Oscar-winning verses for “Glory” from Selma, which are full of faith-based references, or the ultimate religious hip hop anthem, “Jesus Walks” by Kanye West.