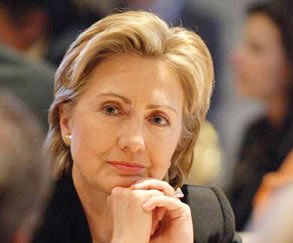 Five weeks ago there was a lot of talk about Hillary Clinton running for president in 2016. Some cited Bill Clinton’s frequent — and quite helpful — assistance in Pres. Obama’s reelection campaign. The former president isn’t close to Pres. Obama, those affiliated with both camps admit as much, so he certainly has not been doing it out of affection (and frankly in politics, it’s rarely affection alone). Others have cited the lack of blockbuster names that could pose a challenge to Clinton were she to run. All of that is true and would leave Hillary in the enviable position of receiving both an endorsement and fundraising support from Obama, as well as having an easy primary where she could spend more time raising money and consolidating Party support instead of waging war versus challengers. But this analysis is flawed in that it doesn’t take into consideration that if Clinton wanted to run in 2016, she would never have decided to serve as Secretary of State.

Mending Democratic Party
When Clinton decided to accept the Secretary of State position it was hailed as a win-win for Pres. Obama and Clinton. After a bruising primary battle that lasted well into the summer, some feared Clinton would channel former Sen. Ted Kennedy and fight all the way to the DNC Convention. After those concerns dissipated, the wounds were still fresh. Clinton’s voters still held animosity and it was clear then-Sen. Obama would have to earn their votes. Then — as now — Bill Clinton was dispatched and slowly Clinton’s voters came around — but more so out of loyalty to the Clintons as opposed to faith in the prospect of an Obama administration.

It came as little surprise then that when announcing Clinton’s appointment a month after the being elected, then-President elect Obama said: “Hillary’s appointment is a sign to friend and foe of the seriousness of my commitment to renew American diplomacy and restore our alliances.” Such rhetoric was as fitting for an overseas government to hear as it was for Clinton’s deep Democratic coalition. A few stump speeches and fundraisers weren’t going to be enough to unite the Democratic Party. Instead it was going to require a union between Pres. Obama and Hillary Clinton. Their fates would need to be intertwined. As Andrew Sullivan surmised at the time: “Withdrawing from Iraq will not be easy and it may well be gruesome. I have no confidence that the place won’t erupt into an even nastier civil war when the United States pulls out than it did when the United States didn’t fully push in. How does a president avoid the domestic blow-back of essentially cutting his losses on a doomed adventure? He uses Clinton as a protective shield from domestic critics. “

That was Obama’s win. What was Clinton’s? Burnishing her legacy and fixing one of the major policy weaknesses exposed during the primary nomination: her lack of foreign policy experience. While there are a number of ways she could have earned such experience — for instance, as UN ambassador or World Bank Chief — the most prestigious role was Secretary of State, chief diplomat of the U.S. during a tumultuous time when we were bogged down in the our two longest wars — Iraq and Afghanistan — in the past 30 years.

Administration Role Too Risky
But with such great reward comes extraordinary risk. Clinton must have known that serving at the behest of Pres. Obama — who had less experience than she in foreign policy — would probably prove catastrophic to a future 2016 presidential run. Ironically, foreign policy has actually turned out to be a tremendous strength for the Obama administration. Gains have been made all over: Al-Qaeda decimated, Libya liberated without U.S. ground troops, Osama bin Laden captured and killed, successful troop withdrawal in Iraq, and the strongest sanctions levied on Iran in generations. But even the most seasoned of administrations makes mistakes.

The Obama administration appears to have made such mistakes concerning the embassy attack in Benghazi on the anniversary of the September 11 attacks. There wasn’t enough security, requests for additional security went unheeded, and the facts surrounding the U.S. response to the attacks are still far too murky.

Working in the administration is an implicit admission that one is prepared to play team ball, and take the hits when needed. Such was the case Monday evening when Secretary of State Clinton told CNN: “I take responsibility” for what happened on September 11” Clinton even went as far to say the White House does not the decide the level of security at embassies. “I want to avoid some kind of political gotcha,” Clinton said, putting the entire calamity on herself.

Who knows what the investigation of Benghazi will unveil. What is known is that if Hillary were still in the Senate, there’d be no hit to take. Instead she would be investigating this situation to “get the truth” and would probably appear bipartisan in the process. Now she’s left taking the fall for the worst attack on a U.S. embassy in the past 30 years. That’s not a legacy in which a candidate can successfully run for president; it’s a nightmare from which not even she will be able to awake.