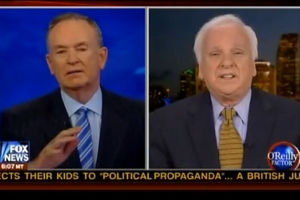 Fox News commentator Bernie Goldberg and Daily Show host Jon Stewart are in the midst of a little disagreement. You see, Stewart wants Fox News to “go f*** yourselves,” and Goldberg thinks Stewart is a hypocrite and a coward for this. Stewart replied with a literal gospel choir of “f*** you”s, and Goldberg told him to “man the hell up” today on America Live. We thought this would be the end of it until last night’s Daily Show. We were wrong.

Today’s O’Reilly Factor featured not one, but two segments dedicated to the Daily Show, the first of which returned Goldberg to the Factor to clarify that he did not have any problem with last night’s 11-minute attack on him and that “I’m not looking to continue any war with Jon Stewart.” No, the problem Goldberg has now is with his fans– young, crude internet users that have invaded is typically civil online space. It was a fairly calm tone for what Goldberg has been dishing out this week, though that might be in part due to the fact that he took the worst of his rage out on Megyn Kelly‘s show, and in part due to the fact that he is now attacking an entire army of computer-friendly liberals that are already wreaking havoc on his website.

Actually, in this segment, it’s Bill O’Reilly‘s assessment that is much more interesting than Goldberg’s. Goldberg seems to want to keep talking about how he wants to bury the hatchet as long as Stewart keeps dedicating half of his show to him. O’Reilly, however, is set to make a true, unapologetic pundit out of Stewart, the better the skewer him. O’Reilly designated Stewart “the point man for the left in media”:

“The point of the matter is that Jon Stewart is now, with a comedy show on a cable network, he’s far more influential than Bill Maher, Michael Moore, all of these other bomb-throwers because the print press loves him, and the entertainment press loves him, and he himself is smart. He knows how to position and to sell satire.”

O’Reilly also asks why there are no conservative comedians with their own TV shows while Stewart enjoys an enormous amount of loyalty from the left. It’s an interesting point, except there are two comedians on his own network with their own shows: one who has now evolved into a serious political commentator but admits to his roots and one who, well, uses fluffy animals and robots to ridicule the left, but gets better ratings at 3 AM than CNN’s primetime lineup. But O’Reilly is right in the sense that a comedian from the right has not yet been able to break through on a more well-recognized comedy network the way liberal comedians do, and that no right-winger has been able to exploit the title of comedian when under fire for serious political points the way Stewart has.