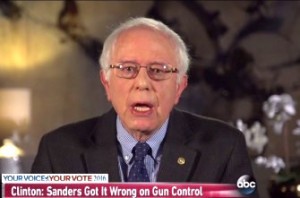 Bernie Sanders‘ confounding refusal to admit his vote to give gun manufacturers immunity from liability claims makes a lot more sense when you look at the latest poll results from the two earliest and whitest states on the primary calendar.

Former Secretary of State Hillary Clinton has taken the occasion of President Obama’s most recent push for gun reform to continue pounding Bernie Sanders over lapses in his voting record on gun control, particularly his vote to grant immunity to gun manufacturers. Clinton made a special phone-in to Chris Matthews on Friday, and spent a good chunk of Sunday morning having a go at Bernie:

DICKERSON: On gun control this week, you have been pretty tough on Bernie Sanders, specifically on the question of legal protection to gun manufacturers.

He has now said that he would be interested in looking to changing the law to allow — to go after gun manufacturers who act irresponsibly. So, isn’t that what you want?

It’s the only industry in our country where we have given that kind of carte blanche to do whatever you want to do with no fear of legal consequences. You know, President Obama and I and Senator Sanders were all in the Senate at the same time. Two of us voted against what the NRA says was the most important piece of legislation in 20 years for the gun lobby.

Senator Sanders voted with them, and through this morning has been unwilling to join the president and me in saying that this should be repealed.

Hillary is absolutely right, but until Sunday morning, Sanders had cracked the door open enough to a repeal that it really wasn’t fair for others to say he has ruled it out. He’s been head-faking at repeal, but vaguely enough that he hasn’t had to admit to a mistake.

That pattern continued Sunday morning, as Sanders tried to give the distinct impression that he would probably support repealing the immunity, again without admitting his original vote was wrong. To many, this appears to be face-saving stubbornness (that’s the vibe I got from folks on Twitter), but if so, then listen to what he still says “makes sense” about that bill:

STEPHANOPOULOS: Did you get it wrong?

But as the Secretary knows, that for many weeks now, I said of course I’ll be happy to take a look at that complicated piece of legislation and deal with it and get rid of those parts of…

STEPHANOPOULOS: Can you say right now…

STEPHANOPOULOS: — that you would vote for it?

SANDERS: — that are wrong. I will vote to revise that bill. There are parts of it that made sense to me.

Look George, if you have a small gun shop owner in Northern Vermont who sells a gun legally to somebody and then, you know, something happens to that guy, he goes nuts or something, and he kills somebody, should the gun shop owner be held liable? I think not.

On the other hand, if you have a manufacturer that is sending guns into an area and really knows that those guns are not being used by the people or bought by the people in that area but are being sold to criminals, should we hold that manufacturer liable? Absolutely.

What Sanders is saying, then, is that he would support narrowing the immunity to only include people who really aren’t liable. The problem is that we already have a way to protect those people, and it’s called a courtroom. There’s no point in making a law that says people who aren’t liable aren’t liable.

At first,  I thought Bernie was just continuing his pattern of taking way too long to change course on really obvious issues, but then I saw the most recent poll results out of Iowa and New Hampshire. Sanders is still getting trounced by Hillary in national polls, but has pulled into a statistical tie in Iowa and maintained a lead in New Hampshire. Coincidentally, Sanders is (badly) defending a vote that could only possibly appeal to rural white voters. His surge in the two early states is probably not attributable to such a narrow issue, but Sanders’ history of sensitivity to the concerns of white voters, and his desperate need for them in these early states, means his position is probably designed to keep from risking losing any of them.

The sad thing is, I don’t even think it would lose him any votes to say he was wrong, because he was, and because any voter who cares enough to be alienated won’t be impressed by the sliver of ground he’s trying to defend.

Sanders has a reputation as a straight shooter, but here, he is clearly only shooting straight into his own foot.