Bernie Sanders Has The Right Message—But The Wrong Strategy

Bernie Sanders Has The Right Message—But The Wrong Strategy 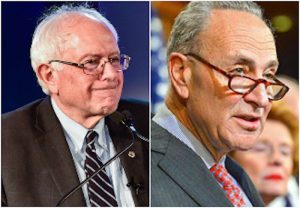 As a progressive journalist who doesn’t hide the fact that I personally support Bernie Sanders, it’s bittersweet to come to this critical conclusion: the progressive icon has the right message, but the wrong strategy.

Sunday was a classic example. Sanders, alongside Senate Minority Leader Chuck Schumer, brought out 8,000 people to a save Obamacare rally on a freezing cold Michigan day.

And trust me, they weren’t there for Schumer’s electrifying speech.

So, you might ask, where’s the problem? Of course, it’s a good thing to energize thousands of people to come out during an election year, much less a random, off-election year Sunday.

But the problem is who Sanders is allowing to piggyback off his powerful, consistent message. Schumer embodies everything that’s wrong, not only with the Democratic Party, but American politics in general. He’s a politician that, over the years, has invested more in his own personal perseverance of power than in helping the average, working class person he’s entrusted in to represent.

Schumer is one of the most bought-off Democrats in a sea of bought-off Democrats, having raised nearly $13 million from Wall Street over his 18-year career. According to a 2010 New York Magazine profile, when Schumer chaired the Democratic Senate Campaign Committee between 2005 to 2009, contributions from Wall Street to the Democrats skyrocketed 50 percent.

Despite being a bought-off shill, even Schumer should be credited with trying to protect Obamacare, which despite being a severely flawed healthcare law, is better than the free-for-all, your-shit-out-of-luck-with-a preexisting-condition system previously in place.

But, it’s not just symbolic credit Democrats like Schumer will receive for standing alongside an actual progressive like Sanders. Most Americans are not political die-hards like you or I; they tune-in-and-out-of politics when a policy issue affects them.

With that reality, the Schumer’s of the world, whose votes on economic issues don’t depart much from Republicans, are able to fool many Americans into thinking they are the ones fighting the good fight for the average Joe—just by being on the same stage and grabbing the same headlines as Sanders.

Why should Sanders allow a Democrat like Schumer—who’s against the reinstatement of Glass-Steagall, who played a key role in getting derivates deregulated for the big banks, who takes oodles of cash from oil companies destroying our planet, who stayed silent while police illegally shot at and abused unarmed water protectors fighting the Dakota Access Pipeline—to stand next to him and con less politically-astute Americans into thinking he’s some type of progressive warrior?

This does more than damage hearts and minds of progressives: it risks setting up the Democratic Party —which certainly looks like it will still be a bought-off, Republican-lite party in four years— as the protagonist in the 2020 thriller that seeks to take down the evil Republican boogeyman, President Trump.

And once victorious, America will be back where it’s been for the last eight years: improving on the surface, but structurally drowning as the majority live paycheck to paycheck while most of the money keeps funneling to Schumer’s donors.

Sanders, presumably, thinks he can change the Democratic Party from within, and as a result, is willing to share the stage with politicians whom don’t exactly warm his heart.

But whether it’s Schumer, or Nancy Pelosi, or Cory Booker, or fill-in-the-blank-corporate shill, Sanders is fooling himself if he thinks he’s going to rewire the minds of politicians who long ago stopped thinking of themselves as public servants.

Schumer and corporate Democrats might be telling Sanders what he wants to hear behind-closed-doors, but if he thinks Schumer, or the others, will move over to more progressive policies for their own political survival—and that of the Democratic Party’s—he’s miscalculated.

There’s a reason all of these folks formally, or informally, endorsed Hillary Clinton before Sanders even launched his presidential bid: they are astoundingly disconnected from the reality of what’s going on in, to borrow a phrase from the un-wise Sarah Palin, real America.

None of these Democrats could see the rumblings of a populist, progressive movement exploding across America because none have actually consistently spoken to average working people across America.

Instead, they surround themselves with the cocktail-crowd, limousine liberals of America, who write them the checks that keep them in power, where they endlessly fight to stay while claiming victory whenever they deliver crumbs of incremental change to people who need much more.

But, Jordan, that’s how our system works, the corporate establishment screams! Change happens slowly, in increments.

NO, that’s the excuse the bought-off politicians, “strategists,” and pundits offer to legitimize a system that continually provides major improvements for wealthy donors and corporations, but not for average workers who, despite breaking their backs day-in-and-day-out,  don’t have lobbyists or endless bank account on their side.

Of course, politics does require compromise and occasionally finding a match with an unlikely bedfellow. I’m not suggesting Bernie take out his sword and go all Game of Thrones on Schumer (although whoever makes the first meme wins a free lemonade). But there’s compromising for the right policy, and then there’s legitimizing figures who are a detriment to your cause.

On social issues, absolutely; on economic matters, not by much.

But if Sanders isn’t careful, he’ll repair a corporate-Democratic Party’s badly beaten vehicle for it just as the country predictably turns against President Trump, who by the looks of it, will be delivering one disastrous policy after another.

And without flinching, Schumer and the corporate establishment will open the car door, and toss him and the progressive movement he represents out into the muddy ditch—on their road back to power.

Senator Sanders, as obvious as it is not to drink and drive, it’s as politically obvious: don’t get in the car with Schumer and the oligarchs he represents. Or the ditch most Americans are already stuck in will only get muddier.