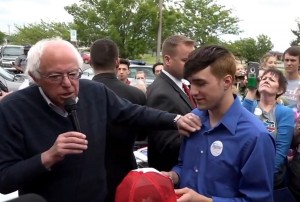 Campaigning in Kentucky over the weekend, Bernie Sanders held an open-air town hall meeting without the hall, and there was some awesomeness, as well as some awkwardness, that was all caught on camera. First, Sanders’ Secret Service detail were somewhat brusquely pushing around a little old lady who just wanted one picture of the senator, but then Bernie brought some kids in for a “future of America” photo op that was adorable, even when, nay, especially when he gruffly told the little ones “C’mon, let’s go!”

Then he had some grownups talk about their student debt, and their health care costs, and he charmingly waved the mic in some woman’s face and said “Tell your story, and then there was another adorable hug mixed with an adorably gruff “here’s your mic.”

Then along came a kid who patiently waited on line while another woman talked about her problems with health care, whom you can see behind her getting messed with and cleared by the Secret Service guy while she talks. When Bernie asked for someone else to talk about health care, the pen-and-cap-wielding kid said “I actually, I don’t have health care.”

So then Bernie said “No, no, can’t sign that right this moment,” and the kid sweetly goes back to his spot to wait, and I was just as sure as you are that Bernie would go back to him at the end and sign his hat, and maybe ask him why he doesn’t have health care:

If there were a primary for autographing stuff in Kentucky, Hillary Clinton would already be the nominee: