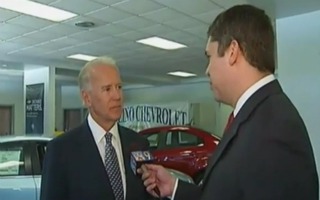 In an interview with West Virginia’s WTOV on Thursday, Vice President Joe Biden was asked about the results of the state’s recent Democratic primary in which a federal inmate running against President Barack Obama received more than 40 percent of the vote. Biden told WTOV that he did not blame the voters of West Virginia’s Democrats, and said “they’re frustrated, they’re angry.”

“Look, I come from a household where whenever there’s a recession, somebody around my grandpop or my dad’s table lost a job.

“A brother, a sister a friend, a neighbor. When you’re out of work, man, it’s a depression. And a lot of people are still hurting because of this god-awful recession we inherited that cost 8.4 million jobs before we could really get going. And so I don’t blame people, they’re frustrated, they’re angry.”

The Bureau of Labor Statics notes that West Virginia’s unadjusted unemployment rate actually went down between March 2011 and March 2012 from 8.7 percent to 7.4 percent. However, some portions of the state continue to suffer double-digit unemployment.

Watch the interview below via WTOV: