Bill Clinton: “We Should Be Aware” Of Oklahoma City Bombing When Discussing The Tea Party Movement 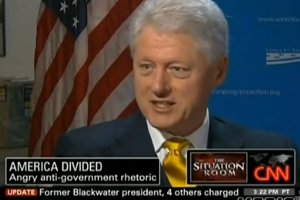 Former President Bill Clinton sat down with Wolf Blitzer yesterday to chat about his assessment of the passion on the part of the Tea Party movement, and after making similar statements yesterday in a speech to the Center for American Progress, he repeated that something like the 1995 Oklahoma City bombing couid happen again given the anger of the movement.

Clinton commented on the recent threats against the President and Congressional members, noting that the threats have “been systematically coming out of the far right” but citing specifically Republican House whip Eric Cantor and New Jersey governor Chris Christie as counter-examples of that. He then continued by arguing that “we should be aware” of the Oklahoma City bombing when we discuss the tea partiers:

“…we have enough threats against the President, enough threats against the Congress that we should be sensitive to it. The 15th Anniversary of Oklahoma City– I’m not trying to draw total parallels, I’m just saying we should be aware of this. This is a vast echo chamber, this internet, and there’s lots of folks listening. And as I said, some are serious, some are delirious. Some are connected; some are unhinged. And all of us who have any responsibility have to exercise that responsibility so that we’re intellectually honest about our political positions, but we’re also intellectually honest about what certain words might do to people who are less stable.”

The comments will probably spark outrage on the part of tea partiers that are once again being accused of having terrorist leanings. Clinton is yet another voice that has adopted the “Timothy McVeigh was a proto-tea partier” talking point– just in time for the fifteenth anniversary of the attack. Sean Hannity has called his fans McVeigh “wannabes” in the past, albeit facetiously. MSNBC is scheduled to air a Beckian documentary thriller suggesting just that on the eve of the bombing, a special entitled “The McVeigh Tapes” hosted by Rachel Maddow.

Stripped of the specifics, though, Clinton’s comments read read more like an attempt at crafting a soundbite that will re-insert him into the national conversation. “I actually love this political debate. I’d like to be a part of it,” he confesses, and his emphasis on the fact that “we’ve been through this before”– while he was President– suggests he would like to be considered an authority on the matter. At the very least he is sure to get some milage out of this interview.