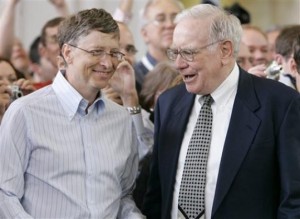 Bill Gates and Warren Buffett rank second and third respectively on Forbes’ list of billionaires. And while both have been involved in philanthropy for quite some time, it was only recently that they launched The Giving Pledge, a challenge directed toward the country’s wealthy to give away majority of their wealth to charitable causes. Today, 34 billionaires have signed on.

According the initiative’s website, “Each person who chooses to pledge will make this statement publicly, along with a letter explaining their decision to pledge…The Pledge is a moral commitment to give, not a legal contract. It does not involve pooling money or supporting a particular set of causes or organizations.”

Those who have signed on agree to give away at least 50 percent of their wealth during their lifetime or after death. Billionaires who have made the pledge include New York Mayor Michael Bloomberg, media mogul Ted Turner, David Rockefeller and Oracle CEO and co-founder Larry Ellison.

Buffett, himself, has pledged to give away a whopping 99 percent of his wealth, saying the remaining 1 percent is more than enough to live comfortably:

This pledge will leave my lifestyle untouched and that of my children as well. They have already received significant sums for their personal use and will receive more in the future. They live comfortable and productive lives. And I will continue to live in a manner that gives me everything that I could possibly want in life.

Some material things make my life more enjoyable; many, however, would not. I like having an expensive private plane, but owning a half-dozen homes would be a burden. Too often, a vast collection of possessions ends up possessing its owner. The asset I most value, aside from health, is interesting, diverse, and long-standing friends.

The philanthropic initiative is an admirable effort, and it seems likely that more of those who can afford to pledge will do so.