Bill Kristol Dismisses Gay Marriage: ‘Pathetic’ To ‘Embrace Views Of Some 26-Year-Old Who Doesn’t Know Anything’ 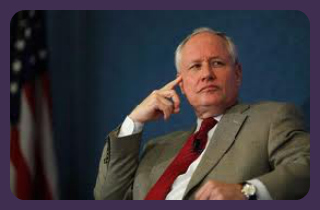 Ah, yes. Everyone’s favorite Bush-era relic, Bill Kristol, has decided that the Republican Party is making a mistake by “rushing to cater to young people” in its partially newfound support for same-sex marriage. Why? Because that means patronizing the views of “some 26-year-old who doesn’t know anything.”

Appearing on The Weekly Standard podcast (a thing that likely sounds like an endless loop of “womp-womping” from the Charlie Brown adults) this weekend, Kristol chuckled his way through dismissing those young “liberals” and their pro-gay marriage views as know-nothings who shouldn’t be any sort of measure for how the GOP conducts itself going forward.

Noting that the Republican “establishment” (not including himself, of course) looks like a herd “running to catch up with the trends” because “some polls show [same-sex marriage] is now 58% popular and five years ago it was only 43% popular” (yes, that’s called an upward trend), Kristol lamented how some of the party’s leaders believe it necessary to take on the “fashionable” position of being okay with gay marriage.

“Not only will those earn the contempt of people who believe in defending traditional marriage,” he said, but they won’t even get credit for hopping onto the bandwagon.

“This kind of pathetic attempt to say, ‘Oh, my God! Young people especially are liberal so let’s just rush to cater to them,’ as if they’re going to respect you if you just embrace the views of some 26-year-old who doesn’t know anything honestly.”

Naturally, a hearty chuckle from both over-the-hill contributors ensued. Both seemingly neglecting that it’s not just those mid-20-somethings who believe in gay marriage more than ever. It’s also their generation, and every other generation. They are all experiencing an upward trend in support for marriage equality. 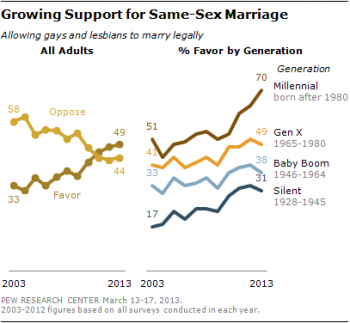 “You know what? Young people are sometimes wrong,” Kristol concluded.

His example? The late 1970s and the end of the George McGovern movement.

Of course, this completely neglects the fact that “young people” were also a driving force behind things like the Ron Paul 2008 movement and, in its earlier, less Glenn Beck-y form, the Tea Party — two of many things which warned the GOP for years that it was in shambles, all while the stodgy types like Kristol continued to wave such notions away.

Kristol and the podcast host also mocked that by possibly shifting on same-sex marriage, the GOP would just be catering to the mentality of popular sitcoms. Yes, because that’s where young people today get all of their pro-gay views — not from, you know, tolerance and a general unwillingness to mimic the pearl-clutching social conservatism of their parents’ generation.

But… he will go down with this ship. Because Mr. Kristol instead prefers that the Republican Party listen to one of the most frequently inaccurate neoconservative pundits out there.

UPDATE: A reader points out that Kristol has been wrong on same-sex marriage before. Back in the ’90s, Kristol predicted that 1993 would be the “high water mark” of the gay rights movement, and that it was “all downhill from there.” Kind of amazing that Kristol is considered an expert predictor on much of anything, eh?

Listen to the audio below via Weekly Standard: