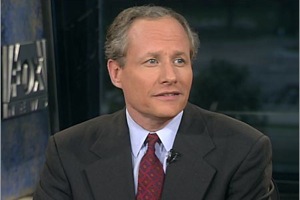 Of the critics of Republican Party chairman Michael Steele since his latest comments against the war in Afghanistan, Weekly Standard editor Bill Kristol was the first and loudest, calling for the chair’s resignation in an open letter. He explained his comments on the Hugh Hewitt radio program, where both he and the host agreed it was a “first principles” issue.

Bill Kristol fleshed out the contents of his letter further to Hewitt, explaining that, although he let many of Steele’s previous gaffes go and considered them inconsequential, having a chairman that does not reflect the views of the views of the majority of the people in the party makes no sense:

Hewitt noted that, aside from the more free-wheeling Ron and Rand Paul, it’s tough to find a Republican that agrees with Steele’s comments, and called it a “first principles issue… We are the internationalist party, the party of pro-engaging in war.”

The full clip from the July 2 Hugh Hewitt program below:

UPDATE: The first strongly-worded demand for Steele to resign from an elected official comes from Oklahoma Congressman Tom Cole, who tells Politico:

“Frankly, I find Steele’s remarks totally unacceptable… He should apologize and resign. He undercut American forces fighting in the field, politicized further a war that two presidents of different parties have deemed in the national interest and embarrassed the party he purports to lead. It is time for him to go — quickly.”