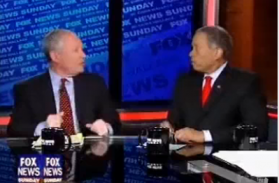 Sparks flew today on Fox News Sunday between Bill Kristol and Juan Williams during a discussion on yesterday’s release to the public of the Goldman Sachs emails by the Senate Permanent Subcommittee on Investigations headed by Sen. Carl Levin.

Bill Kristol is outraged by at the idea that the government is able to access a person’s email and then just arbitrarily release them to the public.

“Sen Levin authorized his staff to release emails that were provided to this committee ostensibly on the grounds this committee was doing a serious investigation. Then they release emails that are simply, they say, embarrassing. It’s outrage actually. Now every business in the United States has to worry that any emails sent anywhere at some point in three years later that can be made to look embarrassing to a chief executive who’s testifying Tuesday [can be publicly released]”

Perhaps before we go forward it’s worth pointing out that any email anybody sends from a company address is company property, and when said company breaks the law and tanks the economy and is called before a Senate investigation committee to account for itself, (and submits those emails in the process, we should add) than yes, you should worry that your emails, embarrassing or otherwise, may be released to the public. At any rate, Juan Williams is having none of it. And I mean none.

It’s not ridiculous when you read the emails and the core here is not the release of the emails it’s the content of the emails…that is the outrage in case you missed it!

At which point Chris Wallace snorts in laughter. This, however, is just the beginning of the shoutfest. The rest is in the clip below.