Bill Maher Has a Fear of Muslims Who Talk Back 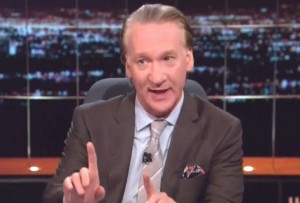 Bill Maher did it again Friday on his HBO show. He went on his predictable rant against Muslims. And just as predictably, he didn’t have even one Muslim on the panel to respond.

Maher not inviting Muslims to be in his show when he lectures on “what Islam is really about” is like having a discussion on Black Lives Matter with only a panel of white people. True, we see that very thing happen on Fox News, but Maher keeps telling us he’s a liberal. Well, wouldn’t a liberal invite a Muslim who disagrees with him on the show when having such a conversation?

On Maher’s show Friday, he told America that Muslims are not countering the threat of radicalization enough, declaring, “We need to ask more of Muslims.” Well what a great place for a Muslim American activist to explain to Bill and the audience exactly what our community has been doing. And to make it clear that no one wants to stop Muslims from committing acts of terror more than fellow Muslim Ameircans for a few reasons. The first is because we don’t want to see innocent people killed in the name of our faith – it’s morally reprehensible. Plus we are painfully aware of the backlash we endure after such an attack, as we are seeing now after Orlando with shots being fired at a mosque, a Muslim man being punched in New York City, women in hijabs being threatened and more.

And if Maher had on a Muslim who is actually a part of the Muslim American community- as opposed to a Muslim who has no following and is more about selling books- he would have learned that Muslims have turned in suspected terrorists and are working with law enforcement.

The reality is Maher at one time did invite a spectrum of Muslim voices on his show. Maher welcomed people like Congressman Keith Ellison, the first Muslim elected to the U.S. Congress, author Reza Aslan, journalist Rula Jabreal and others.

But Reza and Rula haven’t been back on the show since they challenged Maher’s views on Islam a few years ago after his famous blow up with Ben Affleck. And to my knowledge, no one else from the Muslim American community has been invited on the show unless they are on Maher’s side, such as Ayaan Hirsi Ali.

It appears Maher doesn’t want Muslims on his show that will talk back to him. Or could it be that Maher simply doesn’t know any other Muslim Ameircans? Maybe that’s it- Maher needs more Muslim friends.

On my weekly SiriusXM radio show (which will be expanded this week from once a week to live Monday to Friday at Noon ET on Ch. 121- and yes, that was a shameless plug) I open each program by saying, “I want to be your Muslim friend.” Now given my history with Maher, I doubt he wants me on his show. (Last year, Maher mocked me on his show for my Daily Beast article defending Ahmed Mohammed, the teenager who made a clock. Plus I have written countless articles for CNN and The Daily Beast very critical of Maher.)

But I can promise you this is not about me getting on Maher’s show – it’s about having a person from the Muslim American community who can, and will, push back against Maher’s overgeneralizations and half truths about our faith and community.

So here are a few Muslim Americans I have had on my radio show in the past that Maher might like to be friends with and invite on the show. (The order below is random, not a ranking.)

2. Linda Sarsour- a leader in the Muslim American community in New York City and a tireless fighter against racism, sexism and bigotry.

3. Maysoon Zayid- a comedian and activist who is co-founder of the Muslim Funny Fest and New York Arab American Comedy Festival.

4. Wajahat Ali – a journalist and activist with extensive media credentials.

5. Suhail Khan – a Republican Muslim (yes, they exist) who served in the Bush administration.

6. Haroon Moghul – a writer and activist who is busy building bridges between Jews and Muslims.

And the list goes on from Imam Daayiee Abdullah, the openly gay Imam in the United States to Dalia Mogahed, the Director of Research at the Institute for Social Policy and Understanding and many, many others. I’m happy to share their contact info if Maher’s producers are interested.

But now it’s up to Bill: Is he content simply playing a liberal on TV or will actually be one and invite Muslims who don’t agree with on his show? We will all be watching for an answer.