Bill Maher Takes On Rasmussen Polling: Distinguishes Itself By ‘Taking A Side’

Bill Maher Takes On Rasmussen Polling: Distinguishes Itself By ‘Taking A Side’ 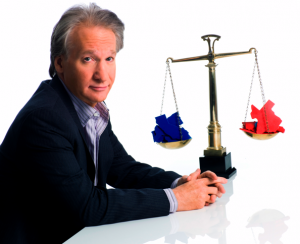 His show might be off this week, but that doesn’t mean Real Time host Bill Maher is taking a break from weighing in on the week that was. In a post published on his show’s blog, Maher writes about “the conservative bubble,” first explaining what he means by this term (And even angling for a job at Fox News, possibly maybe?):

When we talk about the conservative bubble, we’re generally talking about the Fox-Rush-Drudge information bubble, and the people who reside in it. This is the information loop that allows any willing right-winger to live in a world where the opinions they already are the only ones that get recited back to them, and the opinions they will one day have get fed to them so they can later recite them and hear them being recited back again, and around and around we go, all without any having to hear any opposing viewpoints expressed beyond – possibly – those of tokens like Kirsten Powers and that old school Irish Dem who periodically loses it and tells Sean Hannity to go fuck himself. I think his name is Bob Beckel or something. And I’d like his job some day.

This bubble, he continues, exists across a variety of media — radio, TV, print, the internet — and offers information specially curated and organized from a certain conservative perspective for a certain perspective. The same wasn’t true for polling, writes Maher, because “when done correctly,” it “comes from a representative sample of everyone.” And, he adds, “it can be very disconcerting for Republicans, finding out that millions of other Americans exist in the ‘not real America’ and think they’re completely batshit.” But…

Thankfully, Republicans now seem to have solved this problem. Enter Scott Rasmussen. He’s a Republican and a pollster. And a few years ago, it seemed Scott ran his polling outfit the way everyone else did. But somewhere along the line – and I’m guessing here – Scott saw which way the media winds were blowing and realized there was a new way to distinguish yourself in the world of political news: by taking a side.

Maher describes Rasmussen’s polls as basically “plugging a leak” in this co-called conservative information bubble, further limiting contact with the world just beyond this bubble’s surface. He even offers a visual to illustrate his point:

This comes at the end of a week that has added “unskewing” to this election’s ever-expanding glossary. Comedy Central’s Stephen Colbert, you might recall, ventured into the discussion by calling out Fox News contributors for dismissing recent poll results showing Obama beating out Romney in several swing states. These individuals had claimed that the polls “oversampled” Democrats, and advocated waiting for more “accurate” poll results to emerge after Obama and Romney began their series of debates. Later, however, Fox News offered a poll of the network’s own viewership… which, to be sure, runs no risk of oversampling our Democratic brethren. Colbert also poked fun at conservative blogger Dean Chambers for providing an “unskewed” poll of his own, showing different results from those published earlier in the week.

None of this is particularly new or unique to his election, but it is interesting that, in an age of increasingly partisan news coverage available to consumers via popular, mainstream outlets, something as ostensibly neutral as numbers can be seen as untrustworthy. Real information — the facts, unvarnished — have become harder to come by as both sides grow to view facts and numbers with suspicion, aware that these are so often used as ammunition by the opposing side. Just take a look at the comments left on political blogs, including this one right now. Information, particularly concerning political matters, is sought out and consumed in such a way that confirms individual consumers’ leanings. The internet (and internet radio) and 24-hour cable news cycle allows us to live not so much in an Information Age as in an Age of Confirmation Bias.

Because who can you trust, really, other than people just as smart as you?