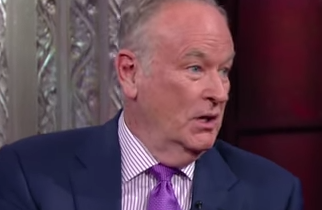 In a wide-ranging interview with The Hollywood Reporter, Fox News’ Bill O’Reilly talked about everything from Broadway’s hit musical Hamilton to what a “special lady” Michelle Obama is. He said, at one point, “I’m not in the business of ideology,” and unlike so many of his contemporaries, he truly seems to mean that.

Here are a few of the best segments from his interview, which you can read here.

On what we can expect this general election season to look like:

It’s just going to be a cage match between [Donald Trump] and [Hillary Clinton]. The debates will tell the tale. They will be the most watched debates in the history of the country by far. It will be like the Super Bowl of politics. I didn’t think that Trump could have overcome her, but to watch the negatives pile up on her doorstep; Hillary Clinton has got a lot of work to do.

On the personality of President Barack Obama:

I don’t dislike the man. I had three good interviews with him. Some people said I was too rude to him, but he can talk for 10 minutes about your socks, so you’ve got to really jump in and say, “Look, this is my question.” And I think he is sincere. I don’t think he’s a bad man.

On the attacks faced by Megyn Kelly beginning last fall and her apparent indignation over his lack of support for her:

I understand where Megyn’s coming from; she was getting hammered by Trump supporters. But it really wasn’t my place. I said quite clearly on the air a number of times that what she asked was a legitimate question. And I said it off the air to Trump, too, in a call. I said, “Hey, I would ask the same question? Not the same way, but I would have asked it.” But it was not my job to intrude on the Fox News Channel hierarchy, which was handling the controversy. Why am I going to get in the middle of that? Roger Ailes is a genius at handling this stuff. I am not going to make his life harder by putting my big mouth in the middle of this thing. But Megyn’s come out of it fine, right? Big star and doing well.

When O’Reilly gives interviews, he always comes across as so much smarter than the typical, line-towing talking head that is sometimes associated with cable news. Maybe that’s because he’s been playing the game so long, he’s become the game itself.