Bono: Sorry for the Apple Deal That Forced U2’s New Album Down Your Throat
Video

Bono: Sorry for the Apple Deal That Forced U2’s New Album Down Your Throat 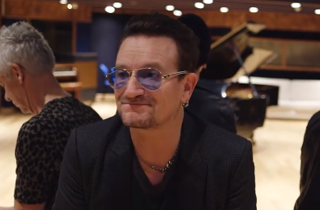 Very few people were particularly happy with U2’s new album, in that it automatically downloaded onto iTunes without people asking for it. And in a Facebook Q&A session, a fan let the band have it:

“Can you please never release an album on iTunes that automatically downloads to peoples [sic] playlists ever again?” asked one Harriet Madison Jobson. “It’s really rude.”

The camera immediately swivels to Bono, who sheepishly mutters: “Oops.”

“I’m sorry about that,” he continued. “I had this beautiful idea and we got carried away with ourselves. Artists are prone to that kind of thing. Drop of megalomania, touch of generosity, dash of self-promotion, and deep fear that these songs that we poured our life into over the last few years mightn’t be heard.”

“There’s a lot of noise out there,” the U2 front man continued. “I guess we got a little noisy ourselves to get through it.”

The album, released as part of a $100 million deal with Apple, automatically downloaded onto iTunes users’ playlists to coincide with the unveiling of the iPhone 6. While many praised the album itself (its Metacritic score indicates “generally favorable reviews”), people weren’t particularly happy that U2’s albums were foisted onto their playlists.

This is a complete 180 from The Edge’s statement that the Apple-U2 deal was “really punk rock.”

Watch below via Facebook (the relevant bit starts at 2:24):