Bored With 2009? What Races Will The Media Cover Incessantly In 2010

Bored With 2009? What Races Will The Media Cover Incessantly In 2010 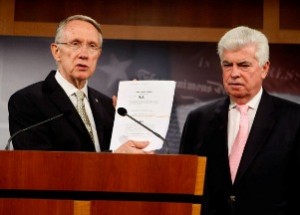 ABC News’ Deputy Political Director Teddy Davis takes a look at 10 important races to watch – and races the media is getting ready to cover very closely.

First of all, it looks like ABCNews.com is already in 2010 mode:

But onto the races. Writes Davis, “The 2010 midterm elections will be viewed as a critical barometer of President Obama’s strength, and an important test of whether the Republican Party has recovered from the drubbing it took at the end of the Bush years.”

A couple of them relate to Senators currently in the news because of the health are bill. And top on the list is Connecticut. “Democratic officials view Sen. Chris Dodd, D-Conn., as their most vulnerable Senate incumbent in 2010,” writes Davis.

Another vulnerable Senator – the Majority Leader himself, Sen. Harry Reid. “In a sign of the trouble he faces at home, Reid recently began running television ads in Nevada — more than a year before voters go to the polls — in an effort to introduce himself to the state’s legions of newly registered voters,” writes Davis.

There’s also the up-in-the-air New York Governor race. Gov. David Paterson will be a candidate, and Andrew Cuomo likely will be as well. Who else? Rudy Giuliani? Hillary Clinton?