Local news outlets in Sarasota, Florida are reporting that a Planned Parenthood facility has been evacuated and emergency officials are on the scene after a suspicious substance was found in the buillding.

Fire and rescue are responding to a hazmat situation, and Sarasota Fire Rescue has indicated that six people have been transported to the hospital for further evaluation.

ABC has reported that nearly 40 people were inside at the time of the evacuation. Moments ago the Sarasota Police Department released the following statement on its social media pages, indicating that the still active scene has also impacted the Sarasota Schools of Arts and Sciences nearby. 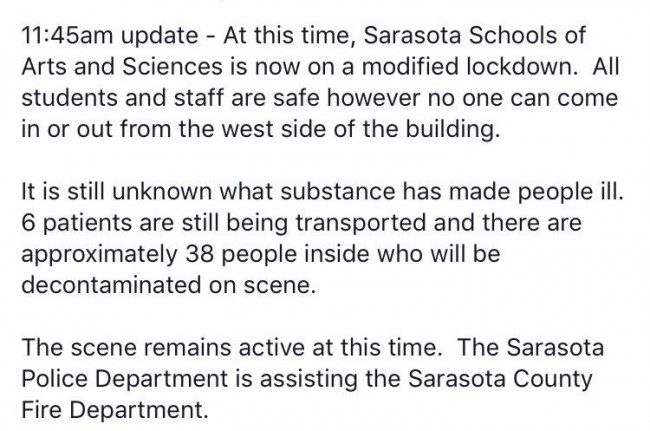 This is a developing story and we will update accordingly as more information becomes available.

UPDATE — 12:47 p.m. ET: Sources are now indicating that the cause of the sickness Monday morning may have been an uncapped cleaning product. According to Bay News 9, “The unknown substance that forced the evacuation of a Sarasota Planned Parenthood facility has been determined to be baby food… Hazmat teams examined cleaning closets and found uncapped cleaning products,” in the vicinity as well. Their report continued: