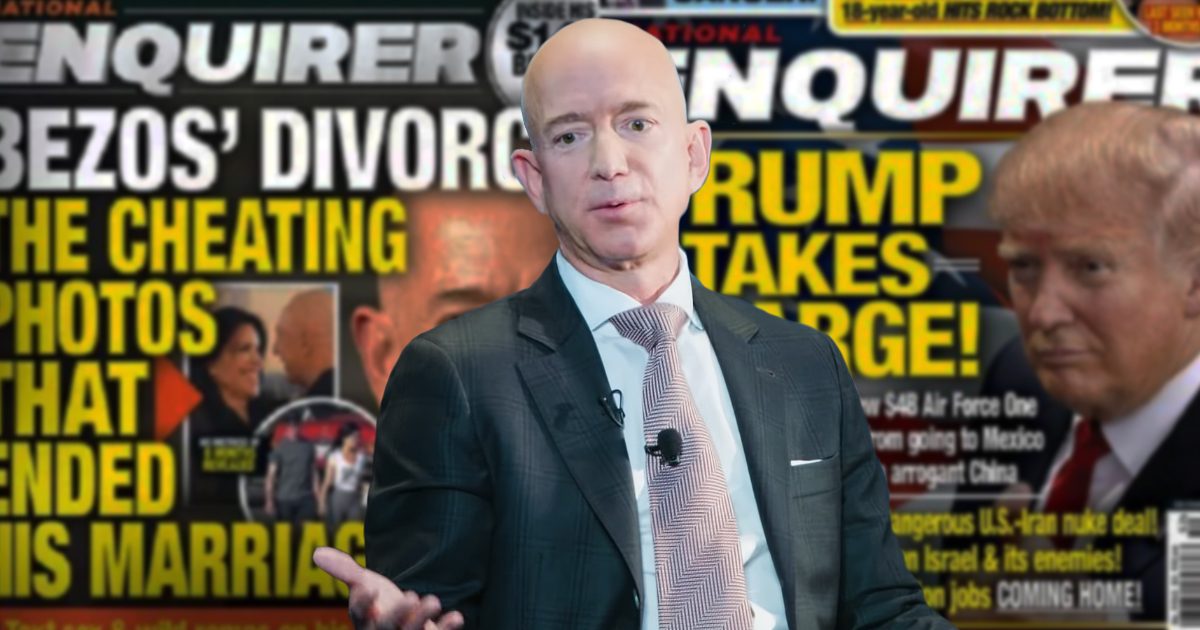 Bezos confirms reporting that he opened an investigation into how his sexts got to the Enquirer and claims he found out that AMI head David Pecker is “apoplectic” about it:

A few days after hearing about Mr. Pecker’s apoplexy, we were approached, verbally at first, with an offer. They said they had more of my text messages and photos that they would publish if we didn’t stop our investigation.

My lawyers argued that AMI has no right to publish photos since any person holds the copyright to their own photos, and since the photos in themselves don’t add anything newsworthy.

And Bezos shares emails detailing the alleged extortion, even an email describing in detail the photos they have acquired (i.e. “A shirtless Mr. Bezos holding his phone in his left hand — while wearing his wedding ring. He’s wearing either tight black cargo pants or shorts — and his semi-erect manhood is penetrating the zipper of said garment.” and ” A naked selfie in a bathroom — while wearing his wedding ring. Mr. Bezos is wearing nothing but a white towel — and the top of his pubic region can be seen.”)

“If in my position I can’t stand up to this kind of extortion, how many people can?” Bezos asks.

In his Medium post, Bezos also makes a point of bringing up AMI’s plea deal with the DOJ and Pecker’s connection to President Donald Trump, saying, “Federal investigators and legitimate media have of course suspected and proved that Mr. Pecker has used the Enquirer and AMI for political reasons.”

A recent Daily Beast report on the investigation Bezos launched said they considered the leak of the original sexts was “politically motivated.”

One of the emails Bezos says he received threatened to release the photos “unless Gavin de Becker and I make the specific false public statement to the press that we ‘have no knowledge or basis for suggesting that AMI’s coverage was politically motivated or influenced by political forces.'”

This story is breaking and will be updated as more information comes in.