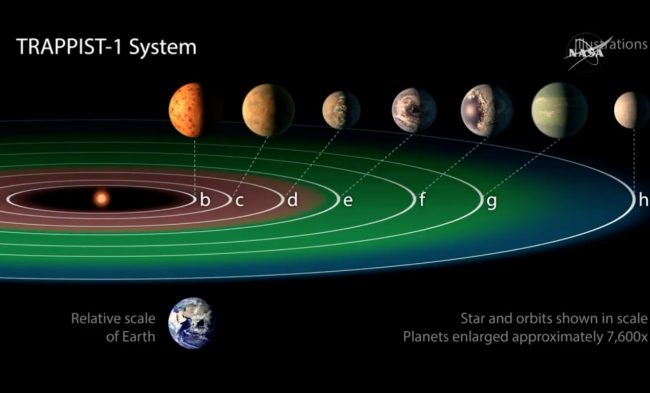 Just moments ago, NASA  finally announced its highly-anticipated news that more than half a dozen Earth-sized planets have been identified in a faraway solar system circling around a star known to the space community as TRAPPIST-1, an “ultra-cool” red dwarf.

New record! We’ve found 7 Earth-sized planets in the habitable zone around a single star outside our solar system: https://t.co/GgBy5QOTpK pic.twitter.com/pPzEcKhTqL

The news of the exoplanets — meaning planets that orbit around a sun other than our own — was highly-touted by NASA this week. NASA has confirmed the existence of more than 3,440 exoplanets in the galaxy to date, though there has never been a discovery that matches the sheer number of habitable-zone planets discovered around one star.

NASA announced Wednesday that three of the seven planets are “firmly” in the zone habitable to life. The discovery announced moments ago sets a new all-time record for the highest number of habitable-zone planets found around a single star outside our solar system.

Thomas Zurbuchen, the associate administrator of the agency’s Science Mission Directorate in Washington, boasted, “This discovery could be a significant piece in the puzzle of finding habitable environments, places that are conducive to life.”

Zurbuchen continued, “Answering the question ‘are we alone’ is a top science priority and finding so many planets like these for the first time in the habitable zone is a remarkable step forward toward that goal.” The discovery is about 40 light-years (235 trillion miles) from Earth, the system of planets is considered to be relatively close to Earth, in the constellation known as Aquarius.

“I’m really excited about this,” added Zurbuchen during the press conference Wednesday, joking that the unofficial names of the exoplanets among the scientists have been based on German beers, though those names are unlikely to stick in the long run. There is currently no reportable news regarding the potential for orbiting moons of the seven discovered planets.

NASA’s Jet Propulsion Laboratory uploaded this 360-degree engaging video moments ago to YouTube that artistically depicts the surface of TRAPPIST-1, with several of the exoplanets visible from the service:

One of the lead scientists associated with the research, Michael Gillon, added, “The seven wonders of TRAPPIST-1 are the first Earth-size planets that have been found orbiting this kind of star. It is also the best target yet for studying the atmospheres of potentially habitable, Earth-size worlds.”
[image via NASA screengrab]