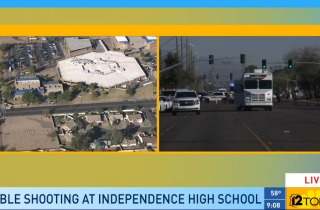 Police in Glendale, Arizona are confirming that at least two people have been shot at Independence High School early Friday morning.

A report from ABC 15 indicated that one person already died, while the second victim’s condition remains unknown. Local police and fire crews have assembled around the site and are currently looking for a suspect. Roads around the school have reportedly been shut down.

This story is developing, and we will add information accordingly as it becomes available.

UPDATE – 11:03 A.M. EST NBC 12 reported that the two victims were female students, and that police are calling it an isolated incident. The school remains on lockdown and parents are being diverted to a local Walmart to await news and their kids.

UPDATE – 12:50 P.M. EST Numerous media sources are reporting now that the second girl, who was also a 15 year old sophomore at the school, has died:

Glendale Sgt. David Vidaure, according to NBC, said that despite the school lockdown, police have deemed that there was no active shooter or a further sign of danger to the community. Glendale mayor Jerry Weiers also put out a message of his own on Twitter.

Our hearts go out to everyone at Independence High School this morning. We are standing by for information.