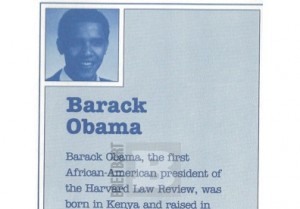 Uh-oh, this is it, folks. Time for Barack Obama to pay the piper that is Breitbart.com’s The Vetting. Our arrogant, elitist President is in deep doo-doo now. Having survived the scandal that was his praising of the first tenured black professor at Harvard during a protest for diversity, President Obama now has to contend with a 1991 pamphlet for a literary agency he hadn’t written for that says he was born in Kenya!

Breitbart.com’s “senior management” would like you to know, however, that they totally believe President Obama was born in the US, and won’t stand for anyone saying different:

Andrew Breitbart was never a “Birther,” and Breitbart News is a site that has never advocated the narrative of “Birtherism.” In fact, Andrew believed, as we do, that President Barack Obama was born in Honolulu, Hawaii, on August 4, 1961.

Yet Andrew also believed that the complicit mainstream media had refused to examine President Obama’s ideological past, or the carefully crafted persona he and his advisers had constructed for him.

Great, glad we got that out of the way. So, what’s the news here?

Breitbart News has obtained a promotional booklet produced in 1991 by Barack Obama’s then-literary agency, Acton & Dystel, which touts Obama as “born in Kenya and raised in Indonesia and Hawaii.”

The booklet, which was distributed to “business colleagues” in the publishing industry, includes a brief biography of Obama among the biographies of eighty-nine other authors represented by Acton & Dystel.

Well, that’s interesting. Sounds like someone involved in the production of a pamphlet got a fact wrong in one of 89 short bios. It’s understandable. Al Gore had barely even invented the internet, and there was no Google yet. That’s certainly not the only conclusion you could draw from this, but it is the fairest.

Or, you could view this thing that Barack Obama had no hand in producing as further evidence of your pre-judged opinion that NObama is some kind of evil fraud:

The biography does, however, fit a pattern in which Obama–or the people representing and supporting him–manipulate his public persona.

David Maraniss’s forthcoming biography of Obama has reportedly confirmed, for example, that a girlfriend Obama described in Dreams from My Father was, in fact, an amalgam of several separate individuals.

Yes, this pamphlet to advertise a book that was never written, right alongside a New Kids On The Block book that was written, is obviously another piece in the Obama world-domination jigsaw puzzle. What better way to get your Obamaganda out there than a trade pamphlet that will be read by dozens?

Breitbart.com helpfully explains that another book confirms the fact that Obama used composite characters in his book Dreams from My Father, but curiously omits the fact that it’s confirming something that was in that book. Damn that Obama, caught in a truth again!

I’m starting to wonder if Breitbart.com is secretly dedicated to getting President Obama reelected. Their first bombshell was practically an Obama campaign ad. This item, despite their sincere protests, will no doubt revive a flagging Birther movement that was forced into obscurity by reality, a movement that sold well with conservative wingnuts, but which only garners sympathy for the President among normal people.