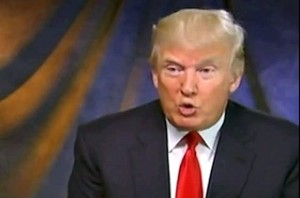 In the span of four days, Donald Trump has gone from “totally unfazed” at the unflattering BuzzFeed profile on the hoax of his political ambitions to stone-cold fazed. In an “exclusive” to Breitbart‘s ace reporter Matt Boyle, Trump alleges that Coppins was momentarily distracted by his pearls of enlightened wisdom to ogle women while staying at the mogul’s resort in Mar-a-Lago.

If you read the original BuzzFeed post, you’ll recall that Breitbart was the site Trump spoke to for an exclusive while on the plane with Coppins, so to get back at BuzzFeed, Trump went to the one site (and the same reporter, too) that still likes him enough to be the mouthpiece for his accusations:

“There were two beautiful girls walking around Mar-a-Lago,” Trump told Breitbart News in a phone interview about the matter. “He said to me, ‘boy, I wish my wife looked like that’ while he was gawking at them. Unbelievable. What a scumbag.”

Sam Nunberg, the Trump aide that got fired in the fallout from the interview, made the same claim, telling Breitbart that Coppins “ogled a waitress when the two ordered bison burgers at a resort restaurant in an untoward way.”

On top of all that, a hostess at the resort named Bianka Pop claimed, “He was looking at me like I was yummy.”

And, of course, as has been the case throughout this entire mishegas, there was plenty of Twitter snark aimed at Trump and his cohorts, including a reaction from a rather amused Coppins:

Trumpworld gets Breitbart to publish a funny list of fabrications about me drinking & ogling women at Mar-a-Lago. lol http://t.co/wi4A4kKaek

if i were @mckaycoppins, i would get this headline printed out and wear it on a shirt http://t.co/Iz3yDhPPnk

this is actually a very entertaining Breitbart parody http://t.co/Bo9xDnJsx9

Trump people told me same thing about other national reporters at NH event. It didn't stand up to factchecking. http://t.co/GOlaGP58vP

The Breitbart piece on Trump is actually one of the best written humor pieces I've read in a while. Matt Boyle is great at satire.