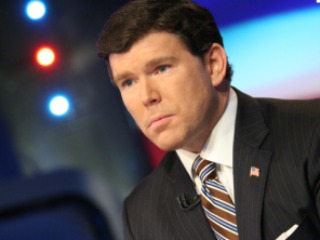 Fox News’ Bret Baier — one of the moderators, you’ll recall, for last week’s Fox News / Google GOP debate in Orlando — was a guest on the Kilmeade & Friends radio show today, where he told host Brian Kilmeade that Barack Obama‘s recent generalizations about Republicans aren’t quite accurate.

As we reported earlier, Obama — deep in campaign mode — addressed liberal supporters in various West Coast cities during his three-day tour of the area, telling his audience that Republicans would “fundamentally cripple America” and calling out GOP presidential hopeful Rick Perry, saying ” you’ve got a Governor whose state is on fire denying climate change.”

The President also referenced the booing from some in the audience that took place at last week’s debate after an openly gay solider asked a question about the future of gays in the military:

You’ve got audiences cheering at the prospect of somebody dying because they don’t have healthcare and booing a service member in Iraq because they’re gay. That’s not reflective of who we are.

But that assessment of what actually happened that night is misleading, Baier tells Kilmeade:

Well, listen. First of all, the audience was, I think, 5,500, maybe? Huge. Huge audience. And the boos on that gay soldier? I would say it may have been two people, maybe three, out of 5,500. Now, it was loud, it was audible. It was a cavernous facility, the Orange County Convention Center. But… it would be painting with a broad brush to say that this crowd boo’d the gay soldier.

Have a listen to the interview, courtesy of Kilmeade & Friends: