Bristol Palin Takes On Obama: Where Is My Call For Maher’s ‘Reprehensible’ Comments? 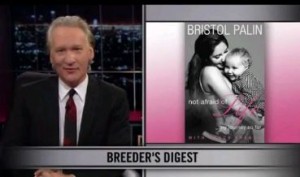 Since President Obama called Sandra Fluke, Bristol Palin has been waiting for her own phone call. Bill Maher made some “reprehensible” remarks about her, and, in a new blog post, Palin argues, if “Maher talked about Malia and Sasha that way, you’d return his dirty money and the Secret Service would probably have to restrain you.”

Palin is referring to a segment Maher did about her book Not Afraid of Life. Maher said, “Bristol Palin has to admit that the reason she fucked Levi over and over until a baby fell out is because she liked it.” He further quipped that the book’s working title was “Whoops, there’s a dick in me.”

But here’s why I’m a little surprised my phone hasn’t rung. Your $1,000,000 donor Bill Maher has said reprehensible things about my family. He’s made fun of my brother because of his Down’s Syndrome. He’s said I was “f—-d so hard a baby fell out.” (In a classy move, he did this while his producers put up the cover of my book, which tells about the forgiveness and redemption I’ve found in God after my past — very public — mistakes.)

If Maher talked about Malia and Sasha that way, you’d return his dirty money and the Secret Service would probably have to restrain you. After all, I’ve always felt you understood my plight more than most because your mom was a teenager. That’s why you stood up for me when you were campaigning against Sen. McCain and my mom — you said vicious attacks on me should be off limits.

She went on to wonder if the presidency has changed Obama, if he’s only willing to defend certain women.

Palin concludes by saying the president should do something “radical and wildly unpopular” to stand against “denigration of all women.” Return the money? Nope: “You’re going to need every dime to hang on to your presidency.” Not even a phone call, Palin writes. “But would it be too much to expect a little consistency? After all, you’re President of all Americans, not just the liberals.”