Buddy Roemer Tells Mediaite: DC Is Bought And Sold By Special Interests…Average Citizen Has No Chance 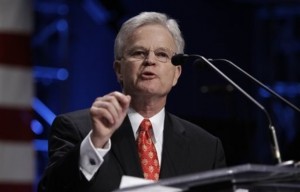 If you don’t know who Buddy Roemer is, it’s probably through no fault of your own. The former Louisiana Governor and Congressman — the only candidate running for President who has experience in both roles — has been ignored by debate organizers and left out of most national polls. It has him trapped in a vicious circle: he needs exposure from debates to get a boost in the polls, but he needs decent poll numbers to get invited to debates. To those who know Roemer, it’s a sad state of affairs — the man is considered brilliant (he started classes at Harvard University when he was 16), charming, and qualified. His main issue is campaign reform, and he won’t accept more than $100 from anyone wishing to donate to his quest for the Presidency.

Governor Roemer sat down with Mediaite and discussed the frustration of being marginalized by his party, the dangers of letting Super PACs run wild, and the progress that he’s making in New Hampshire (In the latest 7NEWS/Suffolk University Poll, Roemer’s 2% helped him pass Rick Perry, tie Rick Santorum, and landed him just one percentage point behind Michele Bachmann). More of the biographical information on him can be found at his campaign website, BuddyRoemer.com

MEDIAITE: Since you haven’t had a chance to do this at the debates, how about we start with the typical tradition of you having 30 seconds to introduce yourself?

BUDDY ROEMER: I’m Buddy Roemer, I’m from the great state of Louisiana, I’ve been Governor, I’ve been Congressman eight years from Louisiana. I’m the only guy running who’s been a Governor and Congressman. I’m a father, I’m a grandfather — three kids, three grandchildren. I’m a banker. I built a billion dollar bank, we didn’t foreclose on anybody, we are profitable, we didn’t take any bailout money. And I’m running for President because I think the country’s headed in the wrong direction. I think Washington is bought and sold by special interests. I think the average citizen has no chance. I think the average person can stand a lifetime in a line waiting for opportunity and a guy with the big check can come up the last minute and take it away from him. It’s not right – jobs and justice, that’s why I run.

M: It has to be frustrating to have these credentials — and plus, you’ve been both a Democrat and Republican — and still get pushed to the side.

BR: I haven’t been heard yet, and that’s what’s frustrating. Look, if people hear me and they don’t want to vote for me, it’s a free country and I’ll be proud to be a guy who ran for President. But if they think this country can be made better by working together—Democrats and Republicans and Independents, I want them to look at me. I’m 68, I have no ego drive. I’ve been to the White House many times as a young Congressman working with Ronald Reagan. If I never go back, I’ll be happy. But I don’t see anybody else — anybody else — who’s not taking the big money. Bought and sold. It’s a disgrace.

M: So when you look at the other candidates out there, are there any that you kind of… like?

BR: I like them all. They all have some talent and they all have dignity, but they don’t have integrity. By this, I mean if you spend enough time in the trough of special interests and government gifts then you don’t smell a pig when it comes. And Newt Gingrich has been in the trough so long he can’t smell a pig. Everything smells about the same to him. Mitt Romney has four one-million dollar checks. Hidden in his campaign. Jon Huntsman has no money in his campaign. Nobody gives him any money. Yet he’s getting all of his money – he spent $4.3 million in New Hampshire — from his daddy and the Super PAC, which is completely illegal. His daddy can give him money, I wouldn’t stop that. But they need to pay taxes on it.

M: And you’ve really prided yourself on staying out of this… limiting donations to $100, right?

BR: I have raised $250,000. My average gift is $51.45. I’ve had contributions from every state in America. I am running a social media, social network campaign. I am centered in New Hampshire, and I am on the rise. I am on the rise. Only three candidates improved their votes in the last 10 days in New Hampshire… Newt Gingrich, Jon Huntsman, and Buddy Roemer. And I’m the only one that doubled my percent in the polls. And I’m going to double it again in the next ten days. And then double it again. You know why? The word’s getting out: Roemer is free to lead, and by God, he knows how to create jobs.

M: This is nothing new to you, right? You made a really big comeback when you were running for Governor of Louisiana.

BR: I did. I had no chance to win. Just like here, people wrote me off, they laughed at me. All the politicians, particularly: ‘He can’t win. He doesn’t take the big checks.’

With 45 days to go, I had 2% of the vote. On Election Day, I beat everybody running. The race was over. They didn’t even have a runoff. I beat three Congressmen, a Governor who had never lost an election — and had been elected Governor three times — and a Secretary of State. I beat ’em all! It wasn’t that I was so good, it was the issue is so good. How about we the people running Washington rather than the lobbyists? It’s just that simple.

M: The difference was that they let you debate in that election…

In Louisiana, I was included in every debate. Even though I was the lowest-ranked candidate. I always had respect in my home state. Because they had watched me work and they knew that my key word was integrity. I never took a penny of PAC money, and that’s what I’m doing as President. And you know something? This race is wide open, man. I’m telling you. It’s wide open. The Republicans haven’t decided who the best warrior will be. I want to be the last man standing. I’m just hoping that I stay alive long enough to make three or four debates and have people see me operate under pressure, see me be tough on my opponents, but fair. See me build a team. I want you to watch me do that. And then this race will be over.

NEXT>>>> “More money was given by lobbyists four years ago, in McCain and Obama’s race, than in 32 states combined. Your country is owned by someone else. It’s scary.”