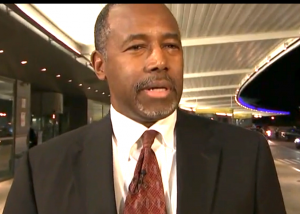 Depending on which party you vote for, Ben Carson is either entering Brian Williams territory on the vetting front, or he’s a victim of an irresponsible media taking the vetting process way, way too far in another attempt to smear a popular Republican.

We saw this very scenario play out yesterday on NBC’s Meet the Press, as Chris Jansing asked Carson why his brother or mother won’t come forward to corroborate his story about his attempt to stab another family member while he was a troubled teenager. Carson’s answered that his mother has Alzheimer’s and his brother has no interest in dealing with the media. But back in 1997, Carson’s mother (Sonya) did confirm the incident happened the way Carson said it did per some nice digging by Buzzfeed’s Andrew Kaczynski:

Here’s Carson’s mother in a 1997 profile of the Ben Carson play saying the stabbing incident happened by the way… pic.twitter.com/WifmQsMJlJ

Which seems to match Carson saying the stabbing incident occurred but was a relative not a friend. Makes sense his mother would know then.

Here’s the big picture on Carson as he stands today against this media onslaught that includes The Wall Street Journal: If he proves even just one of the stories called into question to be true while the others remain ambiguous (minus hard evidence and being a my-word-versus-theirs standoff that basically cancels itself out)… if he is able to show the media is engaging on a hasty witch hunt because Carson is the threat he says he is, he absolutely has an out-clause on all accusations sans hard evidence moving forward. So in the case of the alleged attempted stabbing — and no, the irony isn’t lost here that a presidential candidate’s credibility rests on his ability to prove he tried to kill or at least seriously injure someone once — if Carson says it happened and his mother confirmed it almost 20 years ago, it’s going to provide the doctor all the ammo he needs to raise tons of money (as he did last week as the scrutiny got stronger) and portray himself as a true outsider who is a victim of a media he and a majority of the country thinks is hopelessly biased, sloppy, unethical, or all of the above.

Granted, if not true, these embellishments/inaccuracies/lies/misremembered anecdotes (again, the word/words applied is based on whom you support in the race) aren’t of the scandalous, earth-shattering political variety: W’s DUI-nobody-knew-about-back-in-1976 that was revealed days before the 2000 election or John Edwards’-cheating-on-his-wife-who-was-battling-cancer would fit that category. Instead, the Carson inconsistencies all stem from his 1992 book (Gifted Hands) that seem to be — if you don’t believe him — more of the unnecessary, BriWi-variety that were told to make a non-fictional book a little more interesting, a little more inspiring. It’s hard not to make the comparison to movies like Rudy or A Beautiful Mind, which took some liberties with certain facts in order to make those movies a little more interesting, a little more inspiring. But directors like Ron Howard aren’t running for president. Ben Carson is. And now we’re at five stories this week that will likely chip away at his overall credibility. To what degree isn’t clear…

Did these events happen the way Carson say they did? Yes, no, maybe, not sure (depending on which one we’re talking about and everyone’s individual perspective). Were they exaggerated as many stories are over time? Maybe. Are outlets like CNN, Politico and the Wall Street Journal wrong to pursue validating these stories? No. It’s in Carson’s book and add to his story (poor kid with single Mom rises out of poverty to become world-renowned neurosurgeon) that has been a primary force in his rising poll numbers, and therefore fair game. Will Carson pay for it? Not in the short term. The more you listen to his supporters and watch the polls, the more this campaign has the same feel as Sarah Palin’s late in the 2008 campaign, when she was seen as a victim the same way Carson is by those who feel the media is out to get him because he doesn’t fit the approved mold…that a conservative woman can’t become the nation’s first female VP in the same way a conservative black man can’t exist. Period.

Of course, Hillary Clinton has told her share of whoppers over the years as well (the Bosnia sniper fire story being the one conservative media enjoys pointing to most). Democratic voters, of course, know full well her history of telling invalid truths and propensity to flip-flop on almost every major issue but don’t seem to care very much. Why? Because in the end, their hatred and vitriol towards the Republican party and anything/anyone associated with it far exceeds the importance of holding their candidate to the kind of high moral standard one would expect from a potential president. In the end, Hillary is simply a vessel to power. The vessel may have its major flaws, but the thought process is that anything beats having Republicans control the White House, House and Senate… and therefore all is forgiven. Same goes for whom some were calling not too long ago the party savior in Joe Biden, another political figure with high marks for honesty, who admitted to plagiarizing a paper in law school. But that wasn’t broached by major media and cable news during all the speculation around his possible candidacy, now was it?

So when you’re on Twitter or Facebook or visit the not myopic-at-all comments section below, just keep an eye out for just how hypocritical everyone is on both sides of the aisle. Carson and Republicans in general will be mocked beyond recognition over the next week and beyond by those who would never, ever vote Republican. Yet all the while, they’ll also be patting themselves on the back for supporting a severely-truth-challenged Hillary or considering Biden the next honest Abe. That’s just the way it is in 2015-2016: Seeing another opponent embarrassed and possibly vanquished supersedes any big policy speech by your candidate of choice by a factor of ten.

Ben Carson is having the toughest week of his campaign. He’s playing defense. The calm and cool demeanor is showing some cracks.

But the candidate isn’t the one under pressure here now… any reporter digging decades into his past is.

Because if Carson can even prove one of these stories are true — and the stabbing one just got a big boost in credibility (unless you believe his mother would lie about it despite being under no duress to do so almost 20 years ago) thanks to, ironically, a media member doing his homework — he can play the blame-the-media card all the way to not only the primaries, but to the bank when the donations continue to pour in.