Burned Once, the Media is Now Overrating Trump’s Chances to be Elected 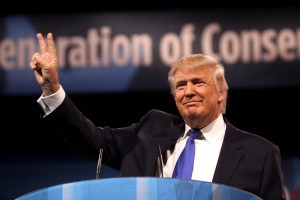 I have written on this website several times in the last year about how Donald Trump was going to––either indirectly (as a disruptor) or directly (as the nominee)––hand Hillary Clinton the presidency. We all know now that the vast majority of news commentators were extremely slow to see that Trump would win the Republican nomination. Most, even the “great” (actually vastly overrated) Nate Silver, got the call completely wrong, even long after it was rather obvious where this was all headed.

Now, having learned their lesson about this “extraordinary election cycle” and Trump’s “magic” with “working-class whites,” many in the media elite are now hedging their bets (while also conveniently maintaining ratings-friendly faux drama) by claiming that Trump could really pull this off.

Silver currently says Trump has a 20% chance (down from an informal 33% a few weeks ago) to be the next president, which is much higher than the 2-5% shot he gave him to win the GOP nomination. Rasmussen Polling (suspiciously) came out with a survey late last week with Trump actually winning, for the first time in a month and for no apparent reason, by four points. The “Predictit” betting market has Hillary as only about a 65% favorite to end up victorious. Numerous conservative commentators (with memories which can’t make it all the back to 2012, apparently) have made dramatic predictions of an impending Trump win, or even landslide.

All of this analysis is significantly and almost hilariously off. While the polls will be perceived as tight probably until the end (especially after the FBI director eviscerated her), if nothing catastrophic happens to Hillary between now and November, the chances of Trump winning the election are still remote. In fact, I would say they are only slightly better than Jim Carrey’s character in the movie “Dumb and Dumber” actually getting his girl (“So you’re saying there’s a chance?!”).

I certainly understand the hesitancy to declare Trump dead. Obviously the elites were already burned once by the Trump “magic,” and Hillary is a historically awful candidate in nearly every way. Also, it is clearly not in the news media’s interest to endanger their summer/fall ratings bonanza by killing the sense that the outcome is really in doubt. But the truth is that Trump’s chances of beating Hillary are being vastly overrated.

The first reason that I know this is that there was very little, if any, “magic” in his primary victory. He was simply given two billion dollars in free advertising by the news media and then benefitted from the rest of the bloated GOP field being too dumb and selfish to realize he was for real and refusing to drop out before it was far too late or anyone else to stop him.

The second basis for my conclusion is that Trump’s polling is nowhere near where he would need to be right now to survive the media storm he will endure for the next four months. Nationally, Trump is still averaging just below 40% against Hillary (Trump’s RealClearPolitics average is currently inflated because they are inexplicably including a very bogus Gravis poll) and about 36% when the full field is added. Much of the media (especially in the all-too-hopeful conservative circles where they seem to have forgotten how poorly they interpreted polls four years ago) is fixated on the relatively small margins by which Hillary is beating Trump. This is an obvious mistake.

I am the first to acknowledge that Hillary’s numbers are horrendous and may get worse in the short run. However, all this shows is what a colossal mistake it was to nominate someone like Trump, who not only offends so many persuadable voters, but who also solves her biggest problem by ensuring massive “negative” turnout in her favor.

Because Trump has both record name ID and “unfavorable” ratings, and because there are still Sanders voters who haven’t yet come “home” to Hillary, the current margins in this race are largely irrelevant. All that really matters is Trump’s share of the electorate and the number of people who would never vote for him. There is simply no scenario where his current numbers get the job done and it is very difficult to concoct one where his percentage of the vote grows to where it might (at LEAST 46%). The ONLY remotely rational Electoral College path for a Trump win is for him to hold ALL of the “Romney” states and somehow add Florida, Ohio and Pennsylvania. He literally has ZERO margin for error.

A normal GOP candidate would still have lots of room to grow their current numbers because they wouldn’t yet be well-known to 100% of the electorate and their negatives wouldn’t be nearly as high. Here, like a sprinter suddenly thrust into a long-distance race, is where Trump pays the price for the very same qualities which allowed him to pull off the upset in the primaries and which will now almost certainly doom him in the general election.

In short, how does Trump add at least 7% of the vote nationally when: almost everyone has already formed a strong opinion about him, his opponent’s negatives can’t get much worse, he has very little money, most of the media is intensely against him, the incumbent Democratic president has a solid 50% approval rating, and his convention looks like it could be underwhelming at best and will be immediately followed by the Democrats’ version? Most people don’t seem to realize that since our media fragmented into a thousand little pieces, huge polling swings in presidential elections have been rare, and the person leading at this point has won the last five times.

Most Trump supporters I interact with on Twitter and Facebook seem to be banking on a couple of things to turn this around (of course, many of them don’t even accept the polls are credible, which is pretty amazing considering how much Trump loved polls during the primaries). The first was that Hillary would surely be indicted, or, at the very least, recommended for indictment by the FBI. As I have been predicting on my radio show for a year, this was always a naïve fantasy and the FBI director has now made it clear that this will not happen. Whatever further damage has been done to Hillary by this issue will be small and temporary, as there will be nothing to keep the story alive until November, especially in a news media favorable to her cause.

The other way, according to his fans, Trump is going to take over this contest is by crushing Hillary in the debates. I find this theory to be delusional.

Trump “dominated” the GOP debates because there were too many people on stage, making those TV events substance-free sound-bite contests. There is a very good reason Trump stopped debating once the field got down to three; when answers and rebuttals can be two-three minutes long there is just no place to hide. Against Hillary, Trump will be as lost as a linguistically-challenged guy who only once visited Paris unexpectedly finding himself in an advanced French class. With a news media eager to crush him (assuming he’s still close in the polls by then) acting as the referees, low expectations and pure luck are the only elements which logically could keep these events from being disasters for Trump.

Since we already found out that a major terrorist attack on our soil doesn’t seem to move the polls (though a bigger one still could, theoretically), that leaves an economic collapse as the only other rational scenario where Hillary could be in big trouble. But if Brexit didn’t come close to trigging such an event, what could between now and November?

As about the only conservative who emphatically predicted Romney’s loss in 2012, it is extremely frustrating for me to see so many of the same “experts” set to get it wrong yet again. While it is too late to stop Trump from getting the nomination, perhaps at least a few of Trump’s non-wealthy fans could be dissuaded from blowing their hard-earned money by giving it to the losing campaign of a fake billionaire.

John Ziegler is a nationally-syndicated radio talk show host and documentary filmmaker. You can follow him on Twitter at @ZigManFreud.