Bush Officials OK with Guy Who Sold U.S. on WMDs as Iraq’s Next PM
Everything Old is New AGain

Bush Officials OK with Guy Who Sold U.S. on WMDs as Iraq’s Next PM 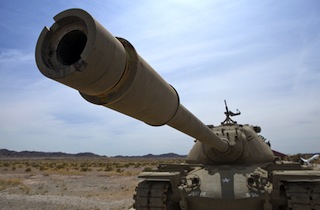 Save for the omnipresent Dick Cheney, the gaggle of Bush administration officials who emerged two weeks ago to lament the U.S. withdrawal from Iraq have largely disappeared from the public debate.

But that doesn’t mean they’re gone. Former Deputy Secretary of Defense Paul Wolfowitz and Bush advisor Richard Perle both expressed openness in the past days to Ahmad Chalabi as a replacement for embattled Iraqi Prime Minister Nouri al-Maliki. Chalabi is a notorious figure from the early days of the Iraq War, as he supplied the United States with a great deal of falsified intelligence upon which the Bush administration made the argument that Saddam Hussein had weapons of mass destruction. Chalabi was later revealed to have been spying on the U.S. for the Iranians.

Water under the bombed-out bridge, thinks Perle. “Chalabi is far and away the most competent and the most capable of salvaging this situation,” said Perle, who has been a Chalabi booster since the 90s. “I think he’s got the best chance. It would be foolish if we expressed a preference for somebody less competent, which we’ve done before.”

Perle went on to argue that Chalabi was an Iraqi nationalist, which made him a more attractive governor than al-Maliki, who by all accounts has led a sectarian administration.

“It’s time for a little humility from U.S. officials,” Perle said. “We should not be picking Iraqi officials for the Iraqi people. It’s time to let them do that themselves.”

Non-architect of the Iraq War Wolfowitz was more restrained. “Chalabi is not an angel; no one in that system is an angel,” he said. “You have to be careful who you work with, but I think you need to try to work with everybody.”

Wolfowitz cautioned that he hadn’t supported Chalabi for PM the first time around, and in fact thought the U.S. should not have had a role in choosing Iraq’s leadership. But he added that the country was in desperate need of a unifying force, and if Chalabi could supply that, then he should be given a shot.

For the record, Chalabi is close enough to Perle and Wolfowitz that both appear above the fold on his Wikipedia page.